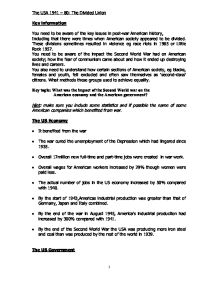 The USA 1941 - 80: The Divided Union Key information You need to be aware of the key issues in post-war American history, Including that there were times when American society appeared to be divided. These divisions sometimes resulted in violence eg race riots in 1965 or Little Rock 1957. You need to be aware of the impact the Second World War had on American society; how the fear of communism came about and how it ended up destroying lives and careers. You also need to understand how certain sections of American society, eg blacks, females and youth, felt excluded and often saw themselves as 'second-class' citizens. What methods these groups used to achieve equality. Key topic: What was the impact of the Second World war on the American economy and the American government? Hint: make sure you include some statistics and if possible the name of some American companies which benefited from war. The US Economy * It benefited from the war * The war cured the unemployment of the Depression which had lingered since 1935. * Overall 17million new full-time and part-time jobs were created in war work. * Overall wages for American workers increased by 29% though women were paid less. * The actual number of jobs in the US economy increased by 50% compared with 1940. * By the start of 1943,Americas industrial production was greater than that of Germany, Japan and Italy combined. * By the end of the war in August 1945, America's industrial production had increased by 300% compared with 1941. * By the end of the Second World War the USA was producing more iron steel and coal than was produced by the rest of the world in 1939. The US Government * During the war Americans accepted the government's right to make laws that regulated and controlled their daily lives. This led to an increase in the power of the federal government in Washington. ...read more.

* Press revelation showed Eagleton has been treated for mental illness and related psychological problems. McGovern said, that did not matter and he was 110% behind Eagleton. The next day he sacked him as the Vice Presidential candidate. * Nixon was ahead in all of the polls and in the November election, he won by 521 electoral votes to 17 for McGovern. This became the biggest ever win in Presidential history. * Nixon with 61% of the popular vote had been given a tremendous vote of confidence by the American people. Watergate What went down in history as 'Watergate' began early in the spring of 1972. It caused the downfall of Richard Nixon two years later. * Nixon appointed some of his closest aides to run his campaign team,(CREEP) and its head was John Mitchell, who had been the Attorney General. * Mitchell with three top Nixon officials, John Erlichman, Bob Haldeman and John Dean in June 1972 and they agreed that they needed to find out what tactics the Democrats were going to employ in the election. * The four agreed that they should authorise a 'surgical operation' (ie. a burglary) of the Headquarters of the Democratic Party at the Watergate building in Washington * Using an ex-CIA Howard Hunt and the Security Officer for the Campaign to Re-elect the President (called 'Creep') and three others, the break-in went ahead on the night of 17 June 1972. * Unfortunately for Nixon, the six men were caught going through files and installing bugging equipment. * On 22 June, Nixon announced that neither he nor anyone involved with his re-election campaign knew anything about the burglary. * The trial of the 'Watergate' burglars began after the 1972 election victory. * A Washington Judge, John Siricca and two reporters on the Washington Post began to uncover a trail that seemed to lead back to the White House. ...read more.

Black Muslims - advocated total separation of races and that there was a inherent superiority of the black race over the white race. * Another Black militant organisation was the Nation of Islam. They believed that White society was evil and therefore black Americans should not live alongside them. * Both wanted separate segregated communities where blacks and whites could run their own affairs without mixing. * Spiritual leader of the Nation of Islam was Elijah Muhammad, although the leading spokesman of the Black Muslims became Malcolm X. * Unlike the non-violent passive resistance preached by Martin Luther King, the Nation of Islam and the Black Muslims encouraged the use of violence as a means of forcing change in American society. * The Nation of Islam encouraged blacks to convert from Christianity as well as abandoning their Christian slave name. One famous convert was the boxer Cassius Clay who became Muhammad Ali in 1964. * By 1965 there were divisions in the Nation of Islam and Malcolm X split with the group to form his own Organisation of Afro American Unity. The Black Panthers Another leading anti-government society the Black Panthers was founded in California by Huey Newton and Bobby Seale. * They were a radical group who wished to use force to achieve their goal of black domination of local ciry society. * The Black Panthers took their name from the 761st Black Panther Tank Unit which had been so effective for General Patton during the D Day assault in World War II. * The Black Panthers were not just a political force but also a private army. At their height in 1969 they numbered over 2000 members. * There were repeated clashes with police and law enforcement agencies between 1967 and 1969 with nine police and 47 Panthers left dead. * The leaders were gaoled in 1969 and Huey Newton went on the write a Pulitzer prize best selling book 'Seize the Time * Bobby Seale became the Democratic mayor of Oakland in 1992. 1 1 ...read more.