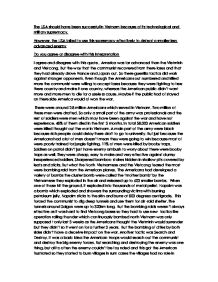 The USA should have been successful in Vietnam because of its technological and military supremacy. However, the USA failed to use this supremacy effectively to defeat a smaller less advanced enemy Do you agree or disagree with this interpretation?

The USA should have been successful in Vietnam because of its technological and military supremacy. However, the USA failed to use this supremacy effectively to defeat a smaller less advanced enemy Do you agree or disagree with this interpretation I agree and disagree with this quote. America was far advanced than the Vietminh and Vietcong. But the way that the communist recovered from there loses and that they had already drove France and Japan out. So there guerrilla tactics did work against stronger opponents. Even though the Americans out numbered and killed more the communist were willing to accept loses because they were fighting to free there country and make it one country, whereas the American public didn't want more and more men to die for a useless cause. Maybe if the public had of stayed on there side America would of won the war. There were around 2.8 million Americans which served in Vietnam. Two million of these men were drafted. So only a small part of the army was professionals and the rest of soldiers were men which may have been against the war and have not experience. 48% of them died in the first 3 months. In total 58,000 American soldiers were killed thought out the war in Vietnam. ...read more.

But it doesn't say when it was made so we don't know if its a primary or secondary source. However the graph has it its limits of usefulness as it doesn't show how many of the men were drafted into the army and how many were professionals. This source backs up the quote because America had a lot of men in Vietnam had should of won the war. Source B is an account of a napalm attack by the Americans. I think that this source is reliable because it is a primary source an eye witness account and the correspondent is writing for a well respected British newspaper, and Britain aren't fighting in the war so it won't be one sided or biased. Although Britain was friends with America his purpose is to tell the truth about Vietnam to alert Britain. But it is limited there isn't enough information to tell if there was a battle or if the bombing is successful. This also backs up the quote because it shows the technological advantages over the communist in Vietnam. Source C is an extract from a GCSE textbook; it is to inform students doing GCSE history that guerrilla warfare was effective. As the Vietcong fought a guerrilla war in there own country. ...read more.

But Williams view doesn't mean the whole of America thought like that maybe that's just his view on the war. This source proves and disproves the quote because yes they both agree that America are more powerful but the Vietnamese had "history" on there side as they had previously beaten France and Japan in a guerrilla war. And that they were fighting to become one country, whereas America was fighting "nothing". Yes the USA should have been successful in Vietnam because they out numbered, had more firepower and were better trained. But they under estimated the Vietnamese and resourcefulness of them and how they could hit and run and make up for there loses. But the USA didn't use there fire power to there full advantage. If they had continuously bombed the Vietcong maybe they would have surrendered. But they didn't know where the Vietcong bases were and some of the tunnels were really well built and was nearly impossible to destroy. The guerrilla tactics also proved very effective against the American soldiers because they weren't used to fighting in the jungle, and were clumsy and 11% of the men were killed by booby traps. So I agree and disagree with the quote because America should have won the war. But the Vietnamese were suited to the jungle tactics and had already forced out France and Japan previously. ...read more.