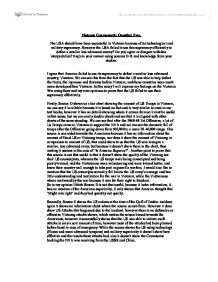 The USA should have been successful in Vietnam because of its technological and military supremacy. However the USA failed to use this supremacy efficiently to defeat a smaller less advanced enemy? Do you agree or disagree with this interpretation?

Vietnam Coursework; Question Two. The USA should have been successful in Vietnam because of its technological and military supremacy. However the USA failed to use this supremacy efficiently to defeat a smaller less advanced enemy? Do you agree or disagree with this interpretation? Explain your answer using sources D-K and knowledge from your studies. I agree that America failed to use its supremacy to defeat a smaller less advanced country, Vietnam. We can see this from the fact that the US was able to help defeat the Nazis, the Japanese and Koreans before Vietnam, and those countries were much more developed than Vietnam. In this essay I will express my feelings on the Vietnam War using facts and my own opinions to prove that the US failed to use their supremacy effectively. Firstly, Source D shows us a bar chart showing the amount of US Troops in Vietnam, we can say it is reliable because it is based on fact and is very similar to ones in our text books, however it has no details showing where it comes from so it cant be useful in that sense, but we can easily double check and see that it is aligned with other charts of the same standing. We can see that after the 1968-69 Tet Offensive, a lot of Us Troops came to Vietnam to support the NVA and we can see the dramatic fall of troops after the Offensive going down from 500,000 to a mere 20-40,000 range. ...read more.

Source F tells us what Saturation/Carpet bombing was like during the Vietnam War by the B-52 Bombers, this source has no name on it, so we don't know whose side it comes from, however by the context we can guess that it is American. The source does not mention why carpet bombing was used and how it was used, it only mentions the effects of it. We can use this source to back up the claim that the US was more advanced because of the power they had, however the source doesn't back up the military supremacy part of the question, because it doesn't show that American used the Saturation bombing effectively. Unlike the previous sources this has some information to where it comes from. So I think this source is useful in the sense that it proves America had technological supremacy but it shows no signs of military tactical supremacy or if the US Air force used the supremacy effectively to defeat the smaller and less advanced army of North Vietnam. Source G tells us the devastating effects of Napalm, The source shows where it comes from and we can trust it is reliable. This source is British and shows a neutral view on Napalm. While it tells us how the Americans used it, it doesn't show the effects it had on the Vietnamese people who was scarred by it. ...read more.

Source J shows us how the troops felt about the Vietnamese, it shows that they were scared of them, because the NVA didn't have a set uniform the US wasn't sure who was a part of the NVA and who was a civilian and as a result that they would not trust a single one of them, because if they misplaced their trust it could be the last thing they do. Source J shows that the Vietcong was so successful in hiding that they were able to pass away as civilians. Source J does show details of where it came from and I believe it can be relied on. It proves that the Vietcong were very successful in their guerrilla war, and their ability to hit and hide was remarkable, while the source backs that up, it has no mention on the US tactics and doesn't help me decided if America was effective in using their 'Supremacy' of Military and Technology during the Vietnam War. In my conclusion, I believe that the sources do not provide enough evidence to prove that the US didn't use their Military and Technological Supremacy effectively. However using the sources with my own knowledge helps me further my claim that the US didn't use superior tactics to win the Vietnam War, and as a result have embarrassed themselves forever on the Global stage. By Lewis Burroughs 10 Newman Miss Cleave History ...read more.