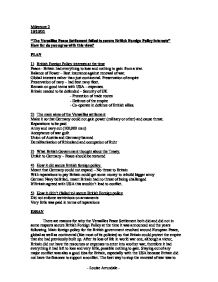 Milestone 2 19/10/05 "The Versailles Peace Settlement failed to secure British Foreign Policy interests" How far do you agree with this view? PLAN 1) British Foreign Policy interests at the time Peace - Britain had everything to lose and nothing to gain from a war. Balance of Power - Best insurance against renewal of war. Global interests rather than just continental. Preservation of empire Preservation of navy - had best navy fleet. Remain on good terms with USA - expenses. Britain needed to be defended - Security of UK - Protection of trade routes - Defence of the empire - Co-operate in defence of British allies. 2) The main aims of the Versailles settlement Make it so that Germany could not gain power (military or other) and cause threat. Reparations to be paid Army and navy cut (100,000 men) Acceptance of war guilt Union of Austria and Germany banned Demilitarisation of Rhineland and occupation of Ruhr 3) What British Government thought about the Treaty. Unfair to Germany - Peace should be restored 4) How it did secure British foreign policy. Meant that Germany could not expand - No threat to Britain With reparations to pay Britain could get some money to rebuild bigger army German Navy belittled, meant Britain had no threat of being challenged If Britain agreed with USA this wouldn't lead to conflict. ...read more.

The German navy was similarly reduced and Germany was forbidden to build major weapons of aggression, contributing to them not being able to build a strong enough army or weapons to fight with. Germany, after futile protests, accepted the treaty, which became effective in January 1920. The vital clauses that were included in the treaty were that Germany had to admit full responsibility for starting the war. This was Clause 231 - the infamous "War Guilt Clause", which angered many Germans, the British also thought that this was harsh on Germany, the clause was mainly introduced by the French and the USA. Germany, as she was responsible for starting the war as stated in clause 231, was, therefore responsible for all the war damage caused by the First World War. Therefore, she had to pay reparations, the bulk of which would go to France and Belgium to pay for the damage done to the infrastructure of both countries by the war. Quite literally, reparations would be used to pay for the damage to be repaired. However Britain was angry that they were not stated to get any of this money that was to be paid back, this would have helped with British expenses such as building up its army in defence for itself and its allies. ...read more.

As far as restrictions on armaments were concerned, they failed to prevent German rearmament because the victorious powers did not have the will to enforce them. That will was lacking especially in Britain, which was most critical of the Versailles Treaty. The British anxious to demobilize, were reluctant also to assume obligations which would provide France with an alternative scheme of security to that which required the crippling of Germany. The Peace settlement of 1919 had many positive and negative effects on British Foreign Policy and the government. British Foreign Policy was dictated by the principle of "balance of power". British politicians believed that Europe after Versailles had become dominated by France and her continental allies, and therefore these countries should be opposed and Germany should become strengthened against them. Also, the irrational British dislike of France and especially of Poland contributed towards the crystallization of a consistent, British anti-Versailles policy, which favoured the slow revival of German power and brought about the overthrowing of the system of Versailles by the conference of Munich and the destruction of Czechoslovakia, and finally by the Second World War. It would seem that there are more ways in which it did not secure British Foreign Policy than ways in which it did, this may be because foreign policy, although should have played a role in the Versailles treaty, revolved more around what Britain needed than the international affairs and what would have helped its allies. ?? ?? ?? ?? - Louise Arrundale - ...read more.