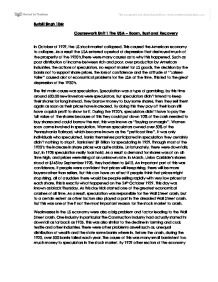 In October of 1929, the US stock market collapsed. This caused the American economy to collapse. As a result the USA entered a period of depression that destroyed much of the prosperity of the 1920's.There were many causes as to why this happened. Such as poor distribution of income between rich and poor, over production by American industries, the actions of speculators, no export market for US goods, the decision by the banks not to support share prices, the loss of confidence and the attitude of ''Laissez-Faire'' caused alot of economical problems for the USA at the time. This led to the great depression of the 1930's. The first main cause was speculation. Speculation was a type of gambling, by this time around 600,00 new investors were speculators. But speculators didn't intend to keep their shares for long instead, they borrow money to buy some shares, then they sell them again as soon as their prices have increased. By doing this they pay off their loan still have a quick profit to show for it. During the 1920's, speculators didn't have to pay the full value of the shares because of this they could put down 10% of the cash needed to buy shares and could borrow the rest, this was known as ''buying on margin''. ...read more.

The government's policy was to not interfere, and let the market sort out its own economical problems out, this was also known as non-intervention. Overproduction was a serious concern and another factor that led to the Wall Street crash. Over production was when you produced surplus amounts than you needed. Alot of industries thought that they should produce as much as they can, hoping , that they would sell all of their products and thus making a profit, but this didn't happen. Due to this happening, they couldn't sell their products and where left with many un-sold products. By 1929, industries mainly the home market that sold consumer goods was running out of customers. Many products had been bought by people in the upper classes in American society at that time and became saturated or full, because people had already bought products that would last them along time. Industries then had to make people redundant or fire them because, this was the only solution to the problem. The loss of confidence in people buying shares at the stock market exchange also led to a big rise of people selling their shares on a mass scale at very low prices. ...read more.

This created chaos among the people at Wall Street at the time and then caused the stock market to crash. This was another major reason why the stock market crashed. Over production was a big concern even before the crash because farmers had already been over producing crops. But industries made surplus amounts of goods which they couldn't sell after, and many products became saturated as many people had already bought them and wouldn't need another for many years. This also created a poor distribution between the rich and poor as the rich could afford to by consumer goods but the poor couldn't. Social factors such as poverty and unemployment also contributed. With people out of work and money not circulating, America wasn't benefiting as no money was going to the government and industries, thus no jobs could be created or saved. Political factors such as laissez-faires meant that if a industry was ever in need of help it wouldn't receive it from the government as the policy states, that the businessman should sort his own economical problems out without the government interfering. These were some of the main reasons why the Wall Street crash happened. ?? ?? ?? ?? Surbjit Singh 10sk Coursework Unit 1 The USA - Boom, Bust and Recovery ...read more.