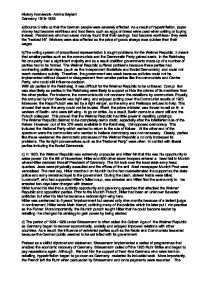 The Weimar Republic and its opponents.

History homework- Amina Seylani Germany 1919-1939. a)Source U tells us that the German people were severely affected. As a result of hyperinflation, paper money had become worthless and food items such as eggs or bread were used when selling or buying instead. Pensioners who had saved money found that their savings had become worthless- they were the "hardest hit". Workers were also affected as the price of goods always rose quicker than their wages. b)The voting system of proportional representation brought problems for the Weimar Republic. It meant that smaller parties such as the communists and the Democratic Party gained seats in the Reichstag. No one party had a significant majority and as a result coalition governments made up of a number of parties had to be formed. The Weimar Republic suffered problems because these parties had contrasting political views (such as the Independent Socialists and Social Democrats) and could not reach decisions quickly. Therefore, the government was weak because policies could not be implemented without dissent or disagreement from smaller parties like the communists and Centre Party, who could still influence decision. With six parties in the Reichstag, it was difficult for the Weimar Republic to be unbiased. ...read more.

The next day, Hitler marched on Munich but he had overestimated the support as the state police and army remained loyal to the government. During the clash, sixteen Nazis were killed. Ludendorff, who had supported Hitler's failed coup, was arrested and Hitler fled the scene only to be arrested two days later charged with treason. Hitler turned his trial into a publicity opportunity and gave long speeches that attacked the Weimar Republic and opposition parties. Prior to the Munich Putsch, Hitler had been an unknown Bavarian politician but after his trial he became a national right wing hero. Hitler was sentenced to 5 years' imprisonment but served only nine months because of a lenient judge. In confinement, Hitler wrote Mein Kampf, outlining many of the policies which he later put into practise as the Fuhrer. More importantly, the Munich putsch taught Hitler that he could become leader by rebelling- he changed his strategy to gain power by being elected. d) The period of 1924-1929 under Stresemann is often called the Golden Age of the Weimar Republic as Germany began to recover economically, socially and enjoyed improved relations with other countries. ...read more.

This meant that support for extremist, far right parties grew which proved to later destabilise the country. Stresemann borrowed 25,000 million gold marks mainly from America. The money was used to build roads, railways and factories. These initiatives not only improved trade in German but employed thousands of people who began to enjoy a better quality lifestyle and prosperity. German culture also flourished and produced many talented actors, writers and artists such as Marlene Dietrich, Paul Klee and Erich Maria Remarque. However, the risqu� lifestyle of the upper classes led the majority of ordinary Germans who valued traditional customs to label it as "decadence". Many groups emerged that opposed this kind of heady and immoral lifestyle. Again, some Germans turned to extremist parties like the Nazis who wanted to return to country values. Therefore, Germany certainly did recover economically and socially under Stresemann from 1924-1929. In the short term, the above policies and agreements helped Germany to recover but all of this fell apart as a result of the depression. Stresemann was mainly criticised for his dependence on the USA for loans as the Weimar republic could not guarantee that prosperity would last. Later, this made Hitler determined to establish complete German autarky. ...read more.