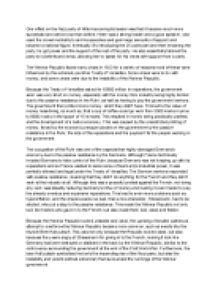 Transfer-Encoding: chunked ﻿One effect on the n**i party of Hitler becoming its leader was that it became much more successful and well-known than before. Hitler was a strong leader and a good speaker, who used the crowd mentality to aid his speeches and gain large amounts of support and became a national figure, eventually. By introducing the 25 point plan and then renaming the party, he got power and the support of the rest of the party. He also essentially tailored the party to is beliefs and views, allowing him to speak for his views with support from a party. The Weimar Republic faced many crises in 1923 for a variety of reasons most of these were influenced by the extremely punitive Treaty of Versailles. Some crises were to do with money, and some crises were due to the instability of the Weimar Republic. ...read more.

The occupation of the Ruhr was one of the aspects that highly damaged Germany's economy due to the passive resistance by the Germans. Although France technically invaded Germany to take control of the Ruhr, because Germany was not keeping up with its reparations and so France wanted to seize some of Germany's industrial power, it was perfectly allowed and legal under the Treaty of Versailles. The German workers responded with passive resistance, meaning that they didn't do anything for the French and they didn't work at the industry at all. Although this was a peaceful protest against the French, not doing any work was steadily reducing Germany?s influx of money and making it even harder to pay the already overdue and expensive reparations. This lead to even more problems such as hyperinflation, and the crises became so bad, that a new chancellor, Stresemann, had to be elected, who put a stop to the passive resistance. ...read more.