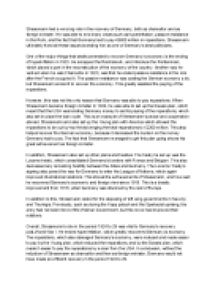 The work of Gustav Stresemann and Germany's recovery.

Transfer-Encoding: chunked ï»¿Stresemann had a very big role in the recovery of Germany, both as chancellor and as foreign minister. He was able to end many crises such as hyperinflation, passive resistance in the Ruhr, and the fact that Germany had to pay £6600 million in reparations. Stresemann ultimately fixed all these issues branding him as one of Germany’s best politicians. One of the major things that straits amended to recover Germany is economy is the ending of hyperinflation in 1923. He scrapped the Reichsmark, and introduce the Rentenmark, which played a part in the reconstruction of the economy of the country. ...read more.

This is an example of Stresemann’s peace and cooperation abroad. Stresemann and also set up the Young plan with America which allowed the reparations to be cut by two thirds bringing the total reparations to £2200 million. This also helped recover the German economy, because it decreased the burden on the money Germany had to pay. The fact that Stresemann managed to get this plan going shows his great achievement as foreign minister. In addition, Stresemann also set up other plans and treaties. The treaty he set up was the Locarno treaty, which consolidated Germany's borders with France and Belgium. ...read more.

Previously, such as during the Kapp putsch and the Spartacist uprising, the army had not been fond of the Weimar Government, but this move had improved their relations. Overall, Stresemann?s role in the period 1924 to 29 was vital to Germany's recovery post-World War I. He ended hyperinflation, which greatly recovered Germany is economy. The reparations, which also damaged Germany's economy, were reduced and made easier to pay by the Young plan, which reduced the reparations, and by the Dawes plan, which made it easier to pay the reparations by a loan from the USA. In conclusion, without the induction of Stresemann as chancellor and then as foreign minister, Germany would not have made an efficient recovery in the period 1924 to 29. ...read more.