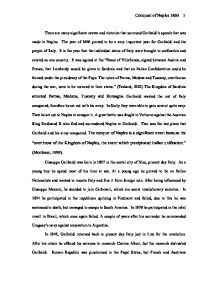 There are many significant events and victories that surround Garibaldi's speech that was made in Naples. The year of 1860 proved to be a very important year for Garibaldi and the people of Italy. It is the year that the individual states of Italy w...

There are many significant events and victories that surround Garibaldi's speech that was made in Naples. The year of 1860 proved to be a very important year for Garibaldi and the people of Italy. It is the year that the individual states of Italy were brought to unification and existed as one country. It was agreed at the "Peace of Villafranca, signed between Austria and France, that Lombardy would be given to Sardinia and that an Italian Confederation could be formed under the presidency of the Pope. The rulers of Parma, Modena and Tuscany, overthrown during the war, were to be restored to their states." (Tankard, 2002) The Kingdom of Sardinia annexed Parma, Modena, Tuscany and Romagna. Garibaldi wanted the rest of Italy conquered, therefore he set out with his army. In Sicily they were able to gain control quite easy. Then he set out to Naples to conquer it. A great battle was fought in Volturno against the Austrian King Ferdinand II who fled and surrendered Naples to Garibaldi. This was the last place that Garibaldi and his army conquered. ...read more.

The speech was very powerful because it carried with it a lot of nationalism, pride and reinstated to the people what it meant to be Italian. Garibaldi in his speech is very proud that he has conquered Sicily and Naples back to Italy and the Italian population, however he also says that "but what then were we, in compliance with diplomacy, to leave our country incomplete and maimed?" (Garibaldi, 1860). He tries to convey to people that although they have conquered some of their land back, the journey is far from being finished. While Sicily and Naples are free, other parts of Italy are still under foreign occupation and still enslaved by the Pope. Garibaldi is urging the population of Italy that although it may be very difficult, they must fight for what is theirs and win their land back. At times the journey may seem impossible and not accomplishable, but they must take risks if they are to succeed in unifying Italy. Garibaldi tries to demonstrate that the unity of the Italian Nation can withstand the greatest powers, this is evident when he says: "though the Bourbon army was still in possession of the forts and the principal points ...read more.

After Prussia defeated Austria, it delivered Venetia to Italy as promised. After Venetia got united with the rest of Italy, there was only one city left in order for Italian Unification to be complete, the city of Rome. In 1870 Prussia went to war with France, "the French troops pulled out of Rome, Italian forces occupied the city." (Morris, 1902). Rome was the last state to join Italian Unification. In 1871 the Unification of Italy was complete. Garibaldi is regarded as a liberator and a father of Italy. He saw one nation, one people free of foreign oppression and rule. His speech in Naples in 1860 was the beginning of a move for a united, free and independent Italy. Reference Garibaldi, G. (1860).Report on the Conquest of Naples. Retrieved July 6, 2005, from Fordham University, Modern History Sourcebook Web site: http://www.fordham.edu/halsall/ mod/1860garibaldi.html. Morris, C. (1902). Young People's History of the World for the Past One Hundred Years W.E. Scull. Retrieved on July 6, 2005, from http://encyclopedia.worldvillage.com/s/b/ Giuseppe_Garibaldi. Mortimer, R. (1999). Collection of Giuseppe Garibaldi. Retrieved on July 6, 2005, from University of Southern Carolina, Library Resources Web site: http://www.sc.edu/ library/spcoll/hist/garib/garib.html. Tankard, K. (2002). Unification of Italy. Knowledge for Africa. Retrieved on July 6, 2005, from http://www.knowledge4africa.co.za/worldhistory/realism03. Conquest of Naples 1860 1 ...read more.