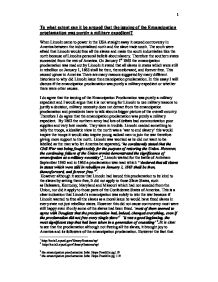 When the civil war began in America the Republican Party was very divided over the war, the abolitionists within the Republican Party had been constantly tearing it apart over the slavery issue, therefore if Lincoln made this civil war about ending slavery as this was a great chance to do so, then it would ensure that Lincoln would maintain the integrity of his party also securing his own position within the party. 'foremost was the consideration that slavery had caused the great rebellion. It had also poisoned political life for more than thirty years. The only way of making sure that it would never wreak such mischief again was to destroy it. Lincoln no longer had any doubt that it was a legitimate aim of the war to remove the cause of the war'11. He would become very popular with the Republicans in his party and gain more votes so therefore stay in power. Also with Lincoln upsetting the south by having the civil war with them he obviously was not going to get there votes, therefore if he freed the blacks and slaves then the ex- slaves and the blacks would vote for him later on, whenever they would be given the opportunity to do so. Therefore it is very possible to see that Lincoln introducing the emancipation proclamation was a lot to do with political reasons and gaining more power in parliament and resolving the myriad of political problems both he and his country faced. ...read more.