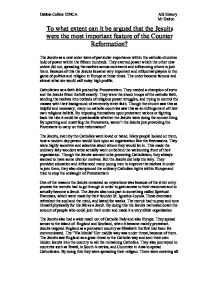 To what extent can it be argued that the Jesuits were the most important feature of the Counter Reformation?

To what extent can it be argued that the Jesuits were the most important feature of the Counter Reformation? The Jesuits as a new order were of particular importance within the catholic churches hold of power within the fifteen hundreds. They exerted power which the other new orders did not, spreading themselves across continents and influencing others to join them. Because of this the Jesuits became very important and influential players in the game of politics and religion in Europe at these times. The order became famous and almost what we would call today high profile. Catholicism as a faith felt pushed by Protestantism. They needed a champion of sorts and the Jesuits fitted the bill exactly. They were the shock troops of the catholic faith, sending themselves into hotbeds of religious power struggles, and trying to control the masses with their background of extremely strict faith. Though the church saw this as helpful and necessary, many no catholic countries saw this as an infringement of their own religious beliefs. By imposing themselves upon protestant nations or fighting back the tide it could be questionable whether the Jesuits were doing the correct thing. ...read more.

The Jesuits saw England as a great threat to the Catholic way and sent their own hidden Jesuits into the country to aid the remaining Catholics. They also journeyed to countries such as Brazil, in South America, and Countries in Asia to spread Catholicism. By doing this they were spreading their religion. There were covering all their bases. If the Protestants did manage to influence Europe at least Catholicism would still spread. But we have to remember that the Jesuits were not the only order in existence. The Oratory of Divine love, the Theatines and the Capuchins. Even before Luther posted his theses on the church door at Wittenberg a distinguished and aristocratic group at Rome had formed a pious brotherhood called the Oratory of Divine Love. Their guiding belief was that the reformation of the church and society begins within the individual soul. The Oratory was never large in number, perhaps 50, yet it had enormous influence. It stimulated reform in the older monastic orders and contributed leaders to the Church of Rome as it laid plans for a general council to deal with internal reform and the Protestant heresy. ...read more.

But the Popes did sometimes use them as their messengers as spreading the word across Europe and the surrounding lands. They agreed with what they did in England and Germany against the Catholics When compared to the other new orders, the Jesuits did have a lasting effect within Europe. Their tactics as an army were successful, but obviously not everywhere as the threat of Protestantism still grew within and around Germany. England was admittedly a setback, but we have to think about if anyone could have made a real difference there with the strength of the crown at that time. They tended to blend the old style of Catholicism with a new panache that exited the potential priests e.g.: the spiritual exercises. Because of this their influence fluctuated between the decades and throughout different countries. But they would have been nothing without papal support and the council of Trent's support in the setting up of Colleges. It is in my opinion that the council of Trent and the Order of the Jesuits both aided the Counter reformation in there own ways which aided the Catholic faith in gaining back some of the trust they had lost from their people. Debbie Collins 12NCA A/S History Mr Dalton ...read more.