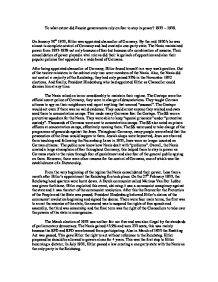 To what extent did Fascist governments rely on fear to stay in power? 1933 - 1939. On January 30th 1933, Hitler was appointed chancellor of Germany. By the mid 1930's he was almost in complete control of Germany and had created a one-party state. The Nazis maintained power from 1933-1939 not only because of fear but because of a combination of reasons. Their consolidation of power played a vital role as did their large lack of opposition and also their popular policies that appealed to a wide band of Germans. After being appointed chancellor of Germany, Hitler found himself in a very weak position. Out of the twelve ministers in the cabinet only two were members of the Nazis. Also, the Nazis did not control a majority of the Reichstag; they had only gained 33% in the November 1932 elections. And finally, President Hindenburg who had appointed Hitler as Chancellor could dismiss him at any time. The Nazis relied on terror considerably to maintain their regime. The Gestapo were the official secret police of Germany; they were in charge of denunciations. They taught German citizens to spy on their neighbours and report anything that seemed "unusual". ...read more.

The March election of 1933 was neither fair nor free and was also illegal by the standards of parliamentary democracy. The Nazis gained 43.9% and won 233 seats, this was mainly because the SPD and KPD were banned from participating. Also in March of 1933 the Enabling Act was passed. This gave Hitler the right to act without reference to the Reichstag. Hitler proposed he should be allowed to govern alone for 4 years. This was the first step to Hitler becoming a dictator. In July 1933, Hitler passed a law creating a one party state with the Nazis as the only party in the Reichstag. Ernst Rohm, the leader of the SA was seen as a large threat to Hitler as he had plans to unite the SA and the German army. However, Hitler wanted to keep the army loyal to him and was fearful that Rohm would overthrow him if his plan went ahead. Thus he decided to purge the SA this was called the Night of the Long Knives. The SS shot approximately 400 people, yet only admitted to 77. One of those murdered was Ernst Rohm. This further consolidated Hitler's power and kept the army on his side. ...read more.

Hitler faced no real opposition, this was due to many different reasons. Organised opposition to the Nazis became almost impossible after the one-party state was created. Many Germans were happy to accept Hitler's rule and so there did not oppose as they provided a strong government. Nazi propaganda was extremely effective, the Nazis created the cult of Hitler, this emphasised the superiority of the Germans over other races. Finally, the protestant and catholic churches did not oppose the Nazis mainly because the Nazis had crushed the communists and they did not want to suffer the same fate. Almost all opposition had been demolished; this helped the Nazis stay in power as it prevented anyone from opposing and gave them no rivalry. There is no denying that fear played a central role in Hitler's maintain of power. The consolidation of power and the nazification process created a state which eliminated all possible opposition. The period of 1933-1939 was seen as a success for most Germans; Hitler was seen as responsible for restoring Germany's pride and had dealt with problems holding Germany down. By 1939, Hitler's popularity had increased and most Germans eagerly accepted Hitler, this was mainly due to fear but also due to the way Hitler had restored Germany and brought back respect. ...read more.