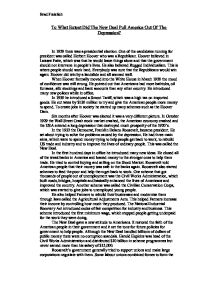 To What Extent Did The New Deal Pull America Out Of The Depression?

To What Extent Did The New Deal Pull America Out Of The Depression? In 1928 there was a presidential election. One of the candidates running for president was called Herbert Hoover who was a Republican. Hoover believed in Laissez Faire, which was that he would leave things alone and that the government should not intervene in people's lives. He also believed Rugged Individualism. This is where people should work hard. Everybody was sure that the Republicans would win again. Hoover did win by a landslide and all seemed well. When Hoover formally moved into the White House in March 1928 the mood of confidence was still strong. He pointed out that Americans had more bathtubs, oil furnaces, silk stockings and bank accounts than any other country. He introduced many new polices while in office. In 1930 he introduced a Smoot Tariff, which was a high tax on imported goods. He cut taxes by $130 million to try and give the American people more money to spend. To create jobs in society he started up many schemes such as the Hoover d*m. Six months after Hoover was elected it was a very different picture. In October 1929 the Wall Street Crash stock market crashed, the American economy crashed and the USA entered a long depression that destroyed much prosperity of the 1920's. ...read more.

This union was large enough to be able to bargain with big corporations. When the New Deal agencies were set up it was not just white people that gained benefits. Around 200,000 black Americans gained benefits from the Civilian Conservation Corps and other New Deal Agencies. Native Americans were also involved in the New Deal. The Indian Reorganisation Act 1034 provided money to help native Americans to buy and improve land. It also helped them to preserve and practise their traditions, laws and culture. Frances Perkins was the Secretary of Labour. She removed 59 corrupt officials from the Labour Department and was a key figure in making the Second New Deal work in practice. The New Deal was not all good though. There were also many negative parts. The New Deal divided the USA. Roosevelt and his officials were often accused of being Communists and of undermining American values. Ickes and Hopkins were both accused of being anti-business because they supported trade unions. The New Deal also undermined local government. A lot Unions were treated with suspicion by employers and many strikes were broken up with brutal violence in the 1930's. Companies such as Ford, Republic Steel and Chrysler employed their own thugs or controlled local police forces. ...read more.

He believed that enough had been done to bring recovery., However production began to fall again as demand decreased. Share prices also fell and businesses started to collapse once more. Unemployment in 1938 stood at 10.5 million. Roosevelt was once again forced to put more money back into the economy and unemployment fell in 1939, but only to 9.5 million. It seemed as if the New Deal had achieved all it could. What did help the American economy to recover was the Second World War. This is because America sold goods to Britain and France, which increased demand for American manufactured goods and food produce. The level of employment fell and when USA entered the war, its full resources, manpower, industry and agriculture were absorbed in the fight against Japan and Germany. The economy was lifted out of depression. My opinion of to what extent did the New Deal pull America out of the depression is that they didn't. All the New Deal did in my opinion was to keep the country from going into complete poverty and kept it running. Even when Roosevelt thought that the New Deal had done enough to regain recovery it slowly started to slip back into depression. This would have just kept happening if they had carried on with schemes for making jobs. The only reason that America got out of depression was because of World War Two. Brad Freislich ...read more.