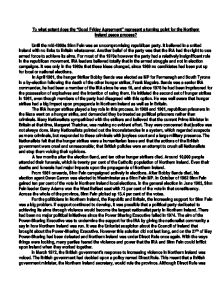 To what extent does the &quot;Good Friday Agreement&quot; represent a turning point for the Northern Ireland peace process?

To what extent does the "Good Friday Agreement" represent a turning point for the Northern Ireland peace process? Until the mid-1990s Sinn Fein was an uncompromising republican party. It believed in a united Ireland with no links to Britain whatsoever. Another belief of the party was that the IRA had the right to use armed force to achieve its aims. For most of the 1970s however the party had a relatively insignificant role in the republican movement. IRA leaders believed totally that in the armed struggle and not in election campaigns. It was only in the 1980s that these ideas changed, since 1969 no candidates had been put up for local or national elections. In April 1981, the hunger Striker Bobby Sands was elected as MP for Fermanagh and South Tyrone in a by-election following the death of the other hunger striker, Frank Maguire. Sands was a senior IRA commander, he had been a member of the IRA since he was 18, and since 1976 he had been imprisoned for the possession of explosives and the intention of using them. He initiated the second set of hunger strikes in 1981, even though members of the party had disagreed with this option. He was well aware that hunger strikes had a big impact upon propaganda in Northern Ireland as well as in Britain. ...read more.

Slowly, new thinking was beginning to emerge within the republican movement. This became clear when the IRA declared a ceasefire on the 31st of August. Under two months later the republican parliamentaries also declared a ceasefire. However, this did not move the majority of the Northern population nor the Southern. People had seen many ceasefires come and go; yet this was different as the people found out when they enjoyed the quietest Christmas they had had for years in 1994. In earl 1995 the ceasefires that had been recently committed were followed by a Joint Framework Agreement. This was thought up by the British and the Irish governments and was a plan for peace in Northern Ireland, including a brand new assembly for Northern Ireland and North-South issues. It set the agenda for the talks, which resulted in the Good Friday Agreement. It was generally accepted and welcomed, and in 1995 there was the lowest death toll that Northern Ireland had had for years. However there was still some opposition and people with doubts about the newfound solution: The Unionists were suspicious about the plan for a North-South Council of Ministers, they were anxious about wether it would lead to a United Ireland. Alongside this worry, the Unionists, along with the British government wanted to see the decommissioning of all IRA weapons, however Sinn Fein said that the IRA would not give up weapons because it did not trust the British government. ...read more.

Bill Clinton took it into his own hands to encourage various opposing leaders to talk or to compromise with their ideas. From April the 6th onwards Tony Blair, Bertie Aherne and the Northern Ireland leaders were negotiating non-stop at Stormont. 'I am pleased to announce that the two Governments and the political parties of Northern Ireland have reached and agreement' This is the statement that was made by Senator Mitchell on April the tenth regarding the decision made by the two governments to make an agreement. Although this was a big step it was only the beginning. In May of 1998 a referendum was held in which the people of Northern and Southern Ireland were asked whether they were prepared to allow Articles two and three to be removed. Ninety four per cent of the Southern population was in favour of this action. In Northern Ireland seventy-one per cent were in favour, although not as big as that in the Republic it still displays the large amount of support from both sides. In my opinion this gesture of potential co-operation shown by both the North and the South of Ireland depicts a positive future for Ireland. Due to this response to the Good Friday Agreement, I believe that this is a turning point in the history of Ireland, and that the outlook for the future of Ireland is indeed a lot brighter than it was. Therefore I believe that the Good Friday Agreement and the enthusiasm shown towards it is a major turning point for Ireland. ...read more.