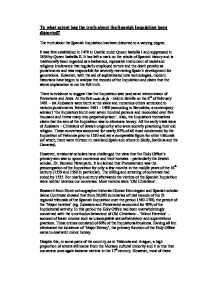 To what extent has the truth about the Spanish Inquisition been distorted?

To what extent has the truth about the Spanish Inquisition been distorted? The truth about the Spanish Inquisition has been distorted to a varying degree. It was first established in 1478 in Castile under Queen Isabella I and suppressed in 1834 by Queen Isabella II. It has left a mark on the whole of Spanish history and is traditionally been regarded as a barbarous, repressive instrument of racial and religious intolerance that regularly employed torture and the death penalty as punishments and was responsible for severely restricting Spain's development for generations. However, with the aid of sophisticated new technologies, modern historians have begun to analyse the records of the Inquisition and claim that the above explanation is not the full truth. There is evidence to suggest that the Inquisition was used as an exterminator of Protestants and Jews. At the first auto de fe - held in Seville on the 6th of February 1481 - six Juidaisers were burnt at the stake and numerous others sentenced to various punishments. Between 1481 - 1488 (according to Bernaldez, a contempory advisor) 'the Inquisitors burnt over seven hundred persons and reconciled over five thousand and threw many into perpetual prison'. ...read more.

Therefore, the truth of the Inquisition's primary function as the exterminator of Jews has been distorted but if the problem had not been dealt with and there were still many 'Major heretics' in Spain, this primary function may have continued. The Inquisition has become notorious for its use of torture. This can be seen in engravings created by artists of the time. However, as Henry Kamen claims, 'most of the excruciating types of torture to be seen in engravings exist only in the artist's imagination'. This is backed up by the fact that out of 2354 people arrested by the Inquisition in Valencia between 1478 and 1530, only twelve are known to have been tortured. Overall, torture was used by the Inquisition but not as much as it has been claimed. The truth has therefore been distorted to a degree. The Spanish Inquisition has been seen as the 'most cruel and bloodthirsty tribunal of all time. This can be seen in the events of the first auto de fe as explained before. Also, in the terrible holocaust of the 1480's it was common to burn at the stake as many as one third of those arrested. ...read more.

Another thing that people are confused about in terms of the Inquisition is that it was not set up nor controlled by the Pope, and after the early 16th century the Papacy ceased to have any active link with it. Nothing like it existed anywhere anywhere in the Catholic Church, and to a extent it was more of a Spanish than a Catholic tribunal. Within Spain it was so allied to, and dependent on, the Crown that later historians often considered it a secular rather than an eccliastical body. However, this is more of a misunderstanding that people have than truth being distorted. Overall, on balance, the Inquisition did bring terror to many communities. In 1487 hundreds of conversos fled from Barcelona rather than face the vigours of the Inquisition's enquiries. However, as many of revisionist historians have made clear, the terror of the Inquisition has been exaggerated by Protestant myth. Torture was used less than in ordinary courts and acquittals or mild penalties were far more common than floogings and burnings. Therefore, the truth of the Spanish Inquisition has not been distorted. What has been rumoured to occur mainly happened at the beginning of the Inquisition's long history. However, it has not been fully distorted as these things did happen. ...read more.