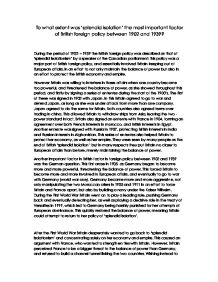 To what extent was splendid isolation(TM) the most important factor of British foreign policy between 1902 and 1939?

To what extent was 'splendid isolation' the most important factor of British foreign policy between 1902 and 1939? During the period of 1902 - 1939 the British foreign policy was described as that of 'splendid isolationism' by a speaker of the Canadian parliament; this policy was a major part of British foreign policy, and essentially involved Britain keeping out of European affairs, in an effort to not only maintain the balance of power but also in an effort to protect the British economy and empire. However Britain was willing to interfere in these affairs when one country became too powerful, and threatened the balance of power, as she showed throughout this period, and firstly by signing a series of ententes during the start of the 1900's. The first of these was signed in 1902 with Japan. In this Britain agreed to go to war and defend Japan, as long as she was under attack from more than one company. ...read more.

Germany became more and more aggressive, not only manipulating the two Moroccan crises in 1905 and 1911 in an effort to force Britain and France apart, but also by building a navy under the Kaiser Wilhelm. During the First World War Britain went on to play a leading role, pushing Germany back and eventually defeating her, as well as playing a decisive role in the treaty of Versailles in 1919, which led to Germany being harshly punished for her attempts at European dominance. This quickly restored the balance of power, meaning Britain could attempt to return to her policy of 'splendid isolation'. After the First World War Britain desperately wanted to go back to 'splendid isolationism' and concentrating solely on her economy and empire. This caused an argument with France, who wanted to strengthen ties with Britain. However, Britain perceived France to be a bigger threat to the balance of power than Germany, and refused to build a channel tunnel linking the two countries. ...read more.

All of these things were against the terms of the Versailles treaty, but Britain did not want to be drawn into a second world war. This was, however unavoidable, with Britain being forced to fight Germany following her attack on Poland. Winston Churchill warned that the policy of appeasement towards Germany would not work, stating that Germany would keep pushing on, and that Britain needed to stand up to her before she got too strong. He was ignored however, and the consequences were the Second World War and the death of millions of troops. So, in conclusion, although 'splendid isolation' was a small part of Britain's foreign policy, it is possible to say that it never actually existed, as it was never an official policy, and more of a collection of policies that would have appeared to be 'splendid isolation' to the rest of the world. However Britain never stuck strictly to this, always interfering in order to preserve both the balance of power and the state of her own economy and empire, even when this mean going to war with Germany. ...read more.