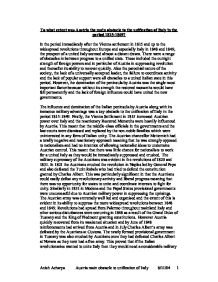 To what extent was Austria the main obstacle to the unification of Italy in the period 1815-1849? In the period immediately after the Vienna settlement in 1815 and up to the widespread revolutions throughout Europe and especially Italy in 1848 and 1849, the prospect of a united Italy seemed almost a distant dream. There were a range of obstacles in between progress to a unified state. These included the outright strength of foreign powers and in particular of Austria in suppressing revolution and thereafter its ability to recover quickly. Also the parochial nature of the society, the lack of a universally accepted leader, the failure to coordinate activity and the lack of popular support were all obstacles to a united Italian state in this period. However, the domination of the peninsula by Austria was the single most important factor because without its strength the restored monarchs would have fell permanently and the lack of foreign influence could have united the new governments. The influence and domination of the Italian peninsula by Austria along with its immense military advantage was a key obstacle to the unification of Italy in the period 1815-1849. Firstly, the Vienna Settlement in 1815 increased Austrian power over Italy and the reactionary Restored Monarchs were heavily influenced by Austria. This meant that the middle-class officials in the governments and the law courts were dismissed and replaced by the non-noble families which were uninterested in any form of Italian unity. ...read more.

In addition the secret societies after 1815 such as the Carbonari and the Sublime Perfect Masters failed to communicate and unite actions due to their emphasis on secrecy. This meant that they were small and scattered making there effect lesser. The Carbonari were badly co-ordinated and failed to cooperate. There existed differences within the Carbonari itself in that some were Italian nationalists whereas others wanted to liberate just there part of Italy. In contrast the Sublime Perfect Masters led by Buonarotti had socialist views and were based around the radical revolutionary Jacobin movement in France during the 1790s. Also Pope Pius XI who was elected in 1846 was considered by many to have liberal sympathies and was therefore seen as a suitable leader by the Papal Federalists such as Gioberti. However, the Pope had only been perceived as a liberal due to his Motu Proprio which allegedly blessed Italy. He also released political prisoners and introduced government and legal reforms. However it soon became apparent that he was not willing to go to war with Austria and this was confirmed by his allocution which said that he was no longer willing to become the head of an Italian federation of states. This again showed that the Pope had a different interest and could not be relied on as a nationalist leader as many perceived him. Therefore their aims and objectives contradicted with that of the Carbonari and hence this underpins the fact that the failure of the provisional governments in working together was dependant on the lack of a universally accepted leader and common political ideals. ...read more.

As a result, the restored rulers were often welcomed back by their subjects. When the Pope returned to Rome in 1850, the citizens cheered him through the streets. In any case, for most people local loyalties dominated. Linguistic and cultural divisions, compounded by natural obstacles like the Apennine Mountains. Despite the Risorgimento, there was little sense of nationhood amongst most ordinary Italians and this meant that there was no real sense of popular support. This was not so much of an important factor because even if they were able to build up popular support it would have been extremely difficult to overcome the military strength of Austria and the cooperation of the provisional governments. In conclusion it can be seen that Austrian military strength and domination over the Italian peninsula was definitely the main obstacle to the unification of Italy in the period 1815-1849. Although the other factors were important in ensuring that the overall effort of the revolutionaries was more united and in turn greater, it was always clear that without the military capabilities and resources of the Austrians there was no way that the revolutionaries could be successful. The overall effort for a united Italy was weak in many different ways and although the lack of a universal leader was definitely the next single most important factor after Austrian power it was only an element to a certain extent. Therefore without Austrian intervention there would have been more liberal provisional governments which would have had a greater chance of working together to form a united Italy. ?? ?? ?? ?? 1 Anish Acharya Austria main obstacle to unification of Italy 8/11/04 ...read more.