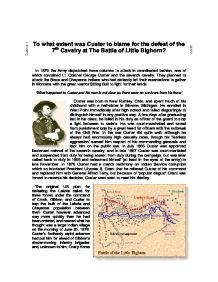 To what extent was Custer to blame for the defeat of the 7th Cavalry at The Battle of Little Bighorn?

To what extent was Custer to blame for the defeat of the 7th Cavalry at The Battle of Little Bighorn? In 1876 the Army dispatched three columns to attack in coordinated fashion, one of which contained Lt. Colonel George Custer and the seventh cavalry. They planned to attack the Sioux and Cheyenne Indians who had defiantly left their reservations to gather in Montana with the great warrior Sitting Bull to fight for their lands. 'What happened to Custer and his men is not clear as there were no survivors from his force' Custer was born in New Rumley, Ohio, and spent much of his childhood with a half-sister in Monroe, Michigan. He enrolled in West Point immediately after high school and failed disgustingly to distinguish himself in any positive way. A few days after graduating last in his class, he failed in his duty as officer of the guard to stop a fight between to cadets. He was court-marshaled and saved from punishment only by a great need for officers with the outbreak of the Civil War. ...read more.

Mitch Boyer warned 'If we go in there we will never come out' but Custer was so heated in what he thought was a glorious triumphal moment that he ignored the plea of his tired men and ordered them forward, he also wanted to move quickly as he thought the Indians would try to escape, 'The largest Indian camp on the North continent is ahead and I am going to attack it'. Contemptuous of Indian military prowess, he split his forces into three parts to ensure fewer Indians would escape; he had used this method successfully at the Battle of Washita. He sent major Reno with 125 men to attack the southern end of the camp, and Captain Benteen, with 125 men, was sent to the south. Captain McDougall took charge of B company and the pack train. Custer himself took 260 men further north to cross the river to attack the Indian camp. 'Custer disobeyed orders because he did not want any other command... ...read more.

After the battle, the Indians came through and stripped the bodies and mutilated all the uniformed soldiers, believing that the soul of a mutilated body would be forced to walk the earth for all eternity and could not ascend to heaven. Inexplicably, they stripped Custer's body and cleaned it, but did not scalp or mutilate it. He had been wearing buckskins instead of a blue uniform, and some believe that the Indians thought he was not a soldier and so, thinking he was an innocent, left him alone. Because his hair was cut short for battle, others think that he did not have enough hair to allow for a very good scalping. Immediately after the battle, the myth emerged that they left him alone out of respect for his fighting ability, but few participating Indians knew who he was to have been so respectful. To this day, no one knows the real reason. Because Custer saw the battle as a 'personal triumph' rather than a 'cavalry's triumph' he was willing to take risks without thinking of the effects they might have on his troops, you could say he was selfish in his orders. ...read more.

Final Comment. Star rating ***
Over all this essay shows excellent knowledge and understanding of the event, but has fallen in to the trap of tellling the story of the battle rather than examining arange of factors. THe essay could have been structured around weighing up 3 key factors. For example Custer's role, the strength and skill of the Idian forces and bad luck in terms of the failure of the rest of the army.