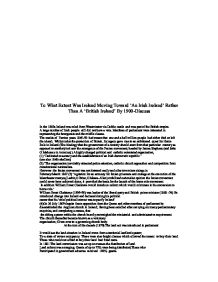 To What Extent Was Ireland Moving Toward 'An Irish Ireland' Rather Than A 'British Ireland' By 1900-Discuss In the 1860s Ireland was ruled from Westminster via Dublin castle and was part of the British empire. A large number of Irish people still did not have a vote. Members of parliament were interested in representing the bourgeosie and the middle classes. The results of Famine years 1845-50 had meant that one and a half million people had either died or left the island; Whilst under the protection of Britain. Its legacy gave rise to an embittered quest for Home Rule in Ireland.(The ideology that the government of a country should stem from that particular country as opposed to another)And saw the emergence of the Fenian movement; headed by James Stephens (and John O Mahoney in America).) A highly charged political and catholic orientated organisation, (1) 'Dedicated to secrecy and the establishment of an Irish democratic republic.' (see also 1848 rebellion) (2) 'The organisation inevitably attracted police attention, catholic church opposition and competition from constitutional nationalists. However the fenian movement was not deterred easily and after two minor risings in February/March 1867 (3) 'Agitation for an amnesty for fenian prisoners and outrage at the execution of the Manchester martyrs,(Larkin,O Brien,O Meara-Allen) ...read more.

After the general election in 1885 Parnell would be leader of an 86 strong party in Westminster. Running concurrently (1885) was the setting up of the Irish patriotic and loyalist movement.(the province of Ulster was 75% protestant of Anglican descent and wished to remain loyal to the british crown.) set up to encourage unionist support to oppose home rule. This organisation had strong parliamentary influence in Westminster and would use its influence to defiantly oppose home rule. In return British parliamentarians would see obvious electoral possibilities. In 1886 Gladstone introduced the first home rule bill. The bill was not successful. Land issues surrounding Ireland during this period (1860-1900) were very bitter. Many MPs in London possessed land in Ireland And did not want to give it up. The land was reaping significant dividends. It was fertile and good for grazing livestock. Britain had used Ireland as an important outlet for british goods en-route to America. The legacy of the famine had also meant the way was open for more British buyers to acquire the land. Those who could afford to buy were obviously anti-home rule. There were strong links with Britain. Ulster was thriving in industry in Linen, flax and wool. Big buisness' such as Harland&Wolff were also dependant upon ties with Britain to further their economic prosperity, and in turn that of the people of Belfast. ...read more.

Sir Henry Wilson. A british version of the Ulster Covenant had been launched in the british press by a lord Alfred Milner; Partially written by Seely and dictated by Wilson; Which read: 'I...of...earnestly convinced of the claim of the government to carry the home rule bill Without submitting it to the judgement of the nation; Do here-by solemnly declare that if that bill is passed I shall hold myself justified in taking or supporting any action that may be effective to prevent it being put it into operation.'(esp.in Ulster) In the early 20th Century in Belfast a certain Quaker Bulmer Hobson and Catholic Denis Mc Cullough founded an organisation called 'The Dungannon Clubs. They preached seperatism, attacked recruiting to the crown forces the navy or police. Hobson and Mc Cullough agreed with Griffith; That there was no such thing as English mercy. Griffith inverted the argument of Cooke more than a century previously: 'Ireland has maintained a representation of 103 men in the English parliament for 108 years ...The 103 Irishmen are faced with 567 foreigners ...Irishmen will marvel they once believed the proper battle-ground for Ireland was one chosen and filled by Irelands enemies.' The Dungannon Clubs began to merge with the Sinn Fein movement; A name given to those who supported Irish Independence; as opposed to home rule.) The name in English means 'And Ourselves' ...read more.