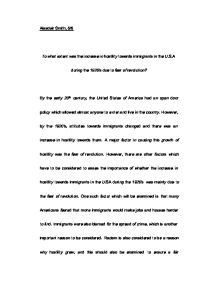 To what extent was the increase in hostility towards immigrants in the U.S.A during the 1920s due to fear of revolution?

It is also argued that the increase of hostility towards immigrants was due to them being blamed for spreading crime. During the 1920's, crime in the States was on the rise. Many politicians used this opportunity to blame immigrants for the rise. A famous trial held throughout the 1920's is a good example of how r****m and dislike of immigrants were closely linked to crime and political revolution. It was the trial of Nicola Sacco and Bartolomeo Vanzetti. Both men had emigrated from Italy and had lived in the U.S.A for a number of years before they were arrested in 1920 for robbery and murder. They were both anarchists, who held revolutionary ideas. Many historians now believe that Sacco and Vanzetti were convicted and executed due to their radical ideas and beliefs, and that it was easy to blame the spread of crime on immigrants. The trial lasted six years and both men were found guilty and were hanged in 1927. Vanzetti claimed that he was not tried because of the murder but because of his political beliefs and where he had come from. ...read more.

This set new limits at 150 000 per year and favoured immigrants originating from Western Europe. This all gave Southern and Eastern Europe a bad image and so Americans did not want immigrants from these areas coming to live in their own country. The laws passed by the government also show the hostility towards immigrants by congress, and this influenced the public's views on immigration. This therefore is an important factor in explaining why there was an increase of hostility towards immigrants during the 1920's. In conclusion, the increase in hostility towards immigrants in the U.S.A during the 1920's is not only due to the fear of revolution but too many other factors too. It is the collection of these factors that led to the growth of hostility towards immigrants. However, some are more important than others, such as r****m and the job situation, as these had a massive impact to many Americans. All of the factors mentioned had all combined to give a general bad view of immigrants to all different kind of Americans. Other factors only affected certain people, such as the job shortage causing most problems for the working class and the "red scare" for government and politicians. The laws introduced by the government are also an important factor, as it had big impact on public opinion of immigration. ...read more.