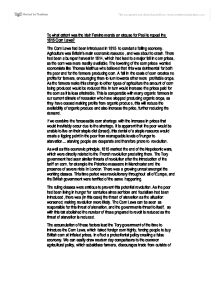 To what extent was the Irish Famine merely an excuse for Peel to repeal the 1815 Corn Laws?

To what extent was the Irish Famine merely an excuse for Peel to repeal the 1815 Corn Laws? The Corn Laws had been introduced in 1815 to combat a failing economy. Agriculture was Britain's main economic resource, and was about to crash. There had been a bumper harvest in 1814, which had lead to a major fall in corn prices, as the corn was more readily available. The lowering of the corn prices worried economists like Thomas Malthus who believed that this was detrimental for both the poor and for the farmers producing corn. A fall in the costs of corn creates no profits for farmers, encouraging them to turn towards other more profitable crops. As the farmers make this change to other types of agriculture the amount of corn being produced would be reduced this in turn would increase the prices paid for the corn as it is less attainable. This is comparable with many organic farmers in our current climate of recession who have stopped producing organic crops, as they have ceased making profits from organic produce, this will reduce the availability of organic produce and also increase the price, further reducing the demand. If we combine the foreseeable corn shortage with the increase in prices that would inevitably occur due to the shortage, it is apparent that the poor would be unable to live on their staple diet (bread), this denial of a staple resource would create a tipping point in the poor from manageable levels of hunger to starvation... starving people are desperate and therefore prone to revolution. As well as this economic principle, 1815 marked the end of the Napoleonic wars, which were directly related to the French revolution predating them. The Tory government had seen similar threats of revolution after the introduction of the tariff on corn, for example the Peterloo massacre in Manchester and the presence of severe riots in London. ...read more.

decided that he would step down from his role as Prime Minister, feeling that he could not follow through with the repeal as his own party refused to support him. The Queen sent for Lord John Russell (the Whig party leader) to take over from Peel, but he couldn't form a government within the time allowances and Peel remained in his position (for the time being). Had Peel only temporarily suspended the tariff it is unlikely that he would have lost his political influence, or the position he did after the repeal in 1846, which he knew before he followed through would split his party deeper than even Maynooth had. Peel reduced the threat of revolt against the Conservative party by repealing the tariff from the masses, though not from within the party itself. Benjamin Disraeli and Lord George Bentick (Radical Tory members of Peels backbench) were hugely opposed to the repeal as it would give the masses power they didn't feel they were deserving of. " The first reports of the partial failure of the potato crop came to the attention of the British government in September 1845. It gave Sir Robert Peel, the Conservative prime minister, the opportunity for carrying through the repeal of the Corn Laws (which taxed foreign grain entering the United Kingdom), which he had believed for some time were no longer economically defensible. On the 15th October he wrote to the Lord- Lieutenants of Ireland "The accounts of the potato crop are very alarming... The remedy is total and absolute repeal for ever of all duties on all articles of substance'' 5 In this source it states that the corn las were " no longer economically defensible" as well as this it is evident that they were no onger economically necessary! Peel had an emergency importation of Indian corn from America, He had to import from America because European resources were limited, as many countries were also suffering from famines similar to Ireland. ...read more.

My opinion is that Peel genuinely wanted to make a difference to the Conservative party (hence policies like the Tamworth manifesto). It was evident that the Conservative party were losing the support of the country over issues like the Corn Laws, therefore it is understandable that Peel felt the changes to be necessary to maintain the respectability of the government, particularly of the Conservative party. For this reason I believe that Peel passed the repeal of the Corn Laws for a combination of factors, not one in particular. These factors being: for himself and his reputation amongst the public, the starving Irish inflicted by famine, the liberal members of his party, the anti-Corn Law league and the mass support received from the English working classes. Due to the unwillingness of his party to cooperate, some have argued that he over-emphasised the influence of famine on his decision to repeal. The over-emphasis of the Irish famine can be seen as an attempt to minimise the opposing influence of the protectionist members of the party, hoping the moral issues presented would encourage them to support the bid to preserve the lives of as many Irishmen as possible! After my study of Peel and the Corn Laws I believe that he was sacrificing himself to protect his Party from the Nation and to some degree the Nation from his party, as a result of the Corn Laws the public were appeased for the time being and the status quo materially maintained. 1 http://www.brainyquote.com/quotes/authors/r/robert_peel.html 2 Sir Robert Peel, The life of sir Robert peel after 1830, Norman Gash, Longman group, 1986. Page 565 3 Charles Greville, The Greville Memoirs: 21 May 1846 Longmans, Green, 1885 4 The Great Hunger, Cecil Woodham-Smith, Hamish Hamilton, 1987, page 270 5 Great Britain and the Irish question, 1800-1922, Hodder and Stoughton. Mahon, Lord and Cardwell, Edward. Eds, memoirs by sir Robert Peel, 2 vols, Murray,1857. Page 59. 6 Sir Robert Peel, The life of sir Robert peel after 1830, Norman Gash, Longman group, 1986. Page 574-575 7 ibid 8 ibid 9 Paul Adelman- Peel and the conservative party 1830-1850, Longman, 1992 ...read more.