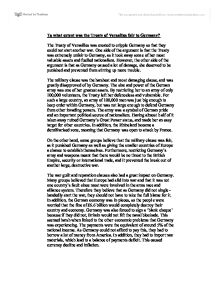 To what extent was the Treaty of Versailles fair to Germany?

To what extent was the Treaty of Versailles fair to Germany? The Treaty of Versailles was created to cripple Germany so that they could not start another war. One side of the argument is that the Treaty was extremely unfair to Germany, as it took away some of her most valuable assets and fuelled nationalism. However, the other side of the argument is that as Germany caused a lot of damage, she deserved to be punished and prevented from stirring up more trouble. The military clause was the harshest and most damaging clause, and was greatly disapproved of by Germany. The size and power of the German army was one of her greatest assets. By restricting her to an army of only 100,000 volunteers, the Treaty left her defenceless and vulnerable. For such a large country, an army of 100,000 men was just big enough to keep order within Germany, but was not large enough to defend Germany from other invading powers. ...read more.

Germany was also forced to sign a 'blank cheque' because if they did not, Britain would not lift the naval blockade. This seemed harsh when linked to the other economic problems that Germany was experiencing. The payments were the equivalent of around 5% of the national income. As Germany could not afford to pay this, they had to borrow a lot of money from America. In addition, they had to import raw materials, which lead to a balance of payments deficit. This caused currency decline and inflation. Despite this, others believed that Germany deserved to take the full blame for the war and therefore should pay for all the damage caused. Furthermore, as Germany originally created the principle of paying reparations and had previously imposed reparations on France after the 1870 war, many groups thought that it was only fair for them to also have to pay. In addition, many people believed that the reparations were fair as the amount was changed to a more reasonable figure in 1929. ...read more.

In addition, they think that forbidding Germany to join with Austria was a good idea, because Austria would have added 12 million people to Germany, which would have enabled it to dominate the continent. Considering the amount of land that Germany lost, how was she supposed to pay such a huge reparations bill, especially since she had lost 16% of its coalfields and almost half of its iron and steel industry? The terms of the Treaty that are unfair seem to outweigh the supposedly fair terms. Germany's greatest asset was its large and extremely powerful army. By having most of it taken away from them, left them with little confidence and pride. It also meant that they had no way of seizing land or boosting their economy, and left them with little protection from other powers. Leaving Germany this weak and vulnerable cannot be seen as a fair punishment. In addition, Germany was deprived of the ability to negotiate any of the terms of the treaty, and had to take full responsibility for all the damage caused by the war. ...read more.

This is a strong response which offers a balanced and systematic assessment of the fairness of the treaty. Knowledge is accurate and judgements are convincing, particularly in the conclusion. 5 out of 5 stars.