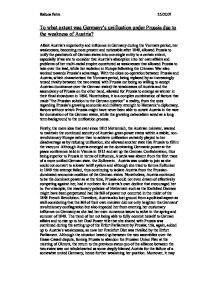 To what extent was the unification of Prussia due to weaknesses of Austria?

To what extent was Germany's unification under Prussia due to the weakness of Austria? Albeit Austria's superiority and influence in Germany during the Vormarz period, her weaknesses, becoming more present and noticeable after 1848, allowed Prussia to unify the patchwork of German states into one single entity to a certain extent, especially if we are to consider that Austria's absorption into her own affairs and problems of her multi-racial empire constituted as weaknesses that allowed Prussia to take over the lead, while her isolation in Europe following the Crimean War also worked towards Prussia's advantage. With the close co-operation between Prussia and Austria, which characterised the Vormarz period, being replaced by an increasingly tensed rivalry between the two states( with Prussia not being so willing to accept Austrian dominance over the German states) the weaknesses of Austria and the ascendancy of Prussia on the other hand, allowed for Prussia to emerge as winner in their final showdown in 1866. Nonetheless, it is a complex combination of factors that made "the Prussian solution to the German question" a reality, from the ones regarding Prussia's growing economic and military strength to Bismarck's diplomacy, factors without which Prussia might have never been able to outwit Austria in the race for domination of the German states, while the growing nationalism acted as a long term background to the unification process. ...read more.

Such a gap between the two must have had an impact on German public opinion to some extent. It was also clear that due to its ascension, Prussia would in the near future be able to finance a full scale war. In order for a state to expand so quickly and so harmoniously, it needed to be somewhat changed socially as well. Manteuffel, the Prussian Prime Minister, aimed to unite the monarchy with its most underprivileged subjects, thus implementing measures to alleviate the suffering of the poor such as low interest government loans for peasant to buy land or minimum wages for factory workers. This may have helped Prussia be at the core of the unification as it, again, offered the people of other states the chance to look up to it, if we are to consider that many of the peasants and especially factory workers lived in miserable conditions and were greatly alienated by the state, with little interest in political affairs or unification. Socially, the army was reformed in the early 1860s as well since von Roon ensured the more rigorous training of soldiers, while von Moltke offered the General Staff more freedom of thinking in their strategies. Yet, a diplomat who had the ability to use all of Prussia's strengths and Austria's weaknesses and who could manipulate key situations was needed in order to speed up or to make, depending on the perspective of either the revisionist or the traditional views. ...read more.

it means that the ideas of change were spread more but on the other side, the intellectuals were against the brutal excesses which would accompany revolution. Therefore, the actual movement of the March 1848 revolution came from a more working-class and peasant background if we are to consider the Berlin riot for example. Although the revolutions of 1848 did not seem to bring about any physical change, the nationalist quality of the movement was revealed as it demanded a united Germany in a central parliament, as the Frankfurt Parliament had attempted to achieve. Moreover, after the 1848 revolutions, national consciousness continued to exist as middle classes tended to lead public opinion and with the National Association being formed in 1859. The national feeling heightened with Bismarck's Franco-Prussian war and ultimately led to unification. In conclusion, it was a combination of factors that helped Germany unify under Prussia. With the balance of power being reversed in the period between 1849 and 1866, Austria's weaknesses made unification possible to a limited extent in my opinion. Of course, had she not started declining economically and militarily, Prussia might have never been able to kick her out of the race, but it may argued that the international situation which moved the balance to Prussia's side, the nationalism and last but not least, Bismarck's Machiavellistic motto of the end justifying the means made Pussia a naturally superior and thus a leader of the unification. ?? ?? ?? ?? Raluca Petre 25.02.07 ...read more.