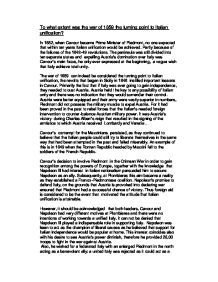 To what extent was the war of 1859 the turning point to Italian unification?

To what extent was the war of 1859 the turning point to Italian unification? In 1852, when Cavour became Prime Minister of Piedmont, no one expected that within ten years Italian unification would be achieved. Partly because of the failures of the 1848-49 revolutions. The peninsula was still divided into ten separate states and expelling Austria's domination over Italy was Cavour's main focus, he only ever expressed at the beginning, a vague wish that Italy achieve total unity. The war of 1859 can indeed be considered the turning point to Italian unification, the revolts that began in Sicily in 1848 instilled important lessons in Cavour. Primarily the fact that if Italy was ever going to gain independence, they needed to oust Austria. Austria held the key to any possibility of Italian unity and there was no indication that they would surrender their control. Austria were better equipped and their army were vastly superior in numbers, Piedmont did not possess the military muscle to expel Austria. ...read more.

However, it should be acknowledged that both leaders, Cavour and Napoleon had very different motives at Plombieres and there were no intentions of working towards a unified Italy. It can not be denied that Napoleon III played a indispensable role in supporting Italy. Napoleon was keen to act as the champion of liberal causes as he believed that support for Italian Independence would be popular at home. This interest coincides also with his desire to see Austria's power diminish, therefore he provided 20,00 troops to fight in the war against Austria. Also, he wished for a federated Italy with an enlarged Piedmont in the north acting as a benevolent ally: a united Italy was rejected as it could act as a threat to France. Cavour's obvious aim was to eradicate Austrian possession, in conjunction he hoped to expand his state of Piedmont into the Papal States and Lombardy. An obvious indication that unification was not considered as a possible option at Plombieres was the fact that when he signed the treaty with Napoleon, he was prepared to sacrifice Savoy and Niece to the French. ...read more.

The Italian peninsula had once been surrounded by revolutionary turmoil, where aims were divided and popular support was lacking. Secret societies such as the Carbonari possessed neither competence nor the desire to work for an Italian state, as they never took extreme action against the Austrians or embarked on outside help. So to some extent it has been proved that the war of 1859 did contribute to the path of Italian Unification as it made it a real possibility for the first time. This is what spurred Garibaldi to capture Sicily and Naples after his expedition to recover Nice from France. In which he endeavoured to blow up the ballot boxes that were to be used by those voting on whether Nice should remain Italian or again become French. If it had not been for the work of Garibaldi, Sicily and Naples would never have been annexed to Piedmont until much later. Moreover it was Cavour's political diplomacy which guided Italy to unification. The war of 1859 is evidence of Cavour's ability to understand that to have any success in ousting Austria France was essential as an ally. ...read more.