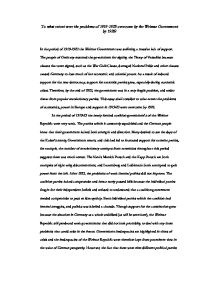 To what extent were the problems of 1919-1923 overcome by the Weimar Government by 1926? In the period of 1919-1923 the Weimar Government was suffering a massive lack of support. The people of Germany resented the government for signing the Treaty of Versailles because clauses that were signed, such as the War Guilt Clause, damaged National Pride and other clauses caused Germany to lose much of her economic and colonial power. As a result of reduced support for the new democracy, support for extremist parties grew, especially during economic crises. Therefore, by the end of 1923, the government was in a very fragile position, and under threat from popular revolutionary parties. This essay shall consider to what extent the problems of economics, power in Europe and support in 1919-23 were overcome by 1926. In the period of 1919-23 the newly formed coalition government's of the Weimar Republic were very weak. The parties within it constantly squabbled and the German people knew that their government lacked both strength and direction. Many desired to see the days of the Kaiser's strong Government return, and this had led to increased support for extreme parties, for example, the number of revolutionary attempts from extremists throughout this period suggests there was much unrest. The n**i's Munich Putsch and the Kapp Putsch are both examples of right wing discontentment, and Luxemburg and Leibknecht both attempted to gain power from the left. After 1923, the problems of weak internal politics did not improve. The coalition parties lacked compromise and hence rarely passed bills because the individual parties fought for their independent beliefs and refused to understand that a coalition government needed compromise to pass an idea quickly. Even individual parties within the coalition had internal struggles, and politics was labelled a charade. Though support for the constitution grew because the situation in Germany as a whole stabilised (as will be seen later), the Weimar Republic still produced weak governments that did not look promising to deal with any more problems that could arise in the future. ...read more.

Therefore, the problem the Weimar Republic faced from communist opposition was overcome as they increased their internal political stability, improved economy and successful defence. However, there was still some support for the communists but it was no longer threatening. Therefore, they were effective in dealing with the problem from the left. The constitution had also dealt with many uprisings from the right. Namely these were the Kapp Putsch in March 1920 and the Munich Putsch in 1923. After the November Munich Putsch the Nazis did not attempt to take power again in the period 1924-26. They also only gained 12 seats in the December 1924 elections. This implies both that the right wing extremists were losing support because there was a decrease in people voting for them and that the Weimar Republic was gaining support because there was an increase in people voting for them. It can be concluded that through general improvement of the German situation, people were happier with the coalition government and had no need to turn to the extremes. Therefore, the coalition had effectively dealt with the situation of revolutionary opposition because they had taken away the dissatisfaction with the government. However, they had not vanquished the problem, merely controlled it temporarily. The Nazis and the communists still regularly had street fights, and there was much lenience given to the nationalist demonstrations, and so this could lead to problems over time, because the support for the Weimar Republic was still unstable and hence the volatility of voters was an issue. The Republic had pushed the problem aside but still had it to deal with in long term. Voters have more political apathy when their country is running smoothly, but this does not mean that they necessarily supported the Weimar Republic, just that they weren't bothered about voting elsewhere. If the country did fall into crisis again the people would not stand by the Republic and would be more likely to support extremists again at the slightest Republican slip. ...read more.

The middle and upper classes were also unhappy with their increased taxation levels. This meant that the elite voters were more likely to vote Nationalist. However after 1923, the Weimar Republic made an effort to keep the elite voters happy and did things such as lengthen maximum working hours. Although the elite voters were unhappy with the Weimar Republic, things were not sufficiently bad within Germany for them to turn their back on democracy, they voted a party that was average for fear a party that could possibly be worse would get into power. By making the country safer, more powerful and stabilising the economy, the Republic were more likely to maintain votes in 1926 than they were in 1923. However, the support was fragile so the problem of displeasing the elite voters was not solved completely and the government lacked effectiveness in being a catch-all party. In conclusion, many of the problems the Weimar Republic faced in 1919-23 had been dealt with in some way, and had achieved some degree of success in being eradicated. The main problem of decreasing support for the party has been somewhat decreased because of the compound gains in situation that Germany had made. However, many of the problems were only over come in the short term and support for the Republic was still very fragile. They had managed to lay the foundations for a stronger country, for example joining the League of Nations, but were living in a volatile Germany, where one drop in the puddle of tranquillity could stir up waves of discontent among the citizens who still had the period of 1919-23 firmly painted in their memories. Problems were dealt with to a small degree but the Weimar Republic had the black mark of having to deal with the League of Nations against their name, so whilst the country was running smoothly, people could ignore this anger, but scapegoats for Germany's later demise were already been prepared. ...read more.