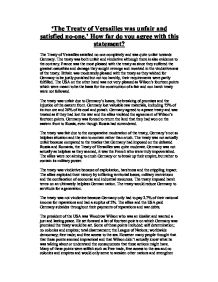 'The Treaty of Versailles was unfair and satisfied no-one.' How far do you agree with this statement? The Treaty of Versailles satisfied no-one completely and was quite unfair towards Germany. The treaty was both unfair and vindictive although there is also evidence to the contrary. France was the most pleased with the treaty as since they suffered the greatest casualties and damage they sought revenge and received in the vindictiveness of the treaty. Britain was moderately pleased with the treaty as they wished for Germany to be justly punished but not too harshly, their requirements were partly fulfilled. The USA on the other hand was not very pleased as Wilson's fourteen points which were meant to be the basis for the construction of a fair and non harsh treaty were not followed. The treaty was unfair due to Germany's losses, the breaking of promises and the injustice of the eastern front. Germany lost valuable raw materials, including 75% of its iron ore and 26% of its coal and potash. ...read more.

However many people thought that that these points seemed impractical and that Wilson didn't actually know what he was talking about or understand the consequences that these actions might have. Many of these points were selfish such as Free trade, free access to the sea and no colonies and empires and would only serve to weaken other nations and strengthen the USA's global position. American people believed in isolationism and even after the League of Nations had been established congress voted against joining. This was due to many German immigrants who didn't want to press charges against Germany; the USA was appalled at WW1 and didn't want to send their troops, regardless of the cost to solve Europe's disputes; and the USA believed in freedom and didn't want to save their empires. The USA was not satisfied with the war guilt clause and German colonies as these went against the fourteen points and they were also not satisfied with the treaty as a whole and thought it to be vindictive, unfair, unwise and a disgrace. ...read more.

Like Wilson Lloyd George didn't want Germany to be treated too harshly and eventually seek revenge and possibly start another war. Britain also wanted to keep trading with Germany and so didn't want to cripple its economy too much as that might affect their own. Britain was completely satisfied with the treatment of the German colonies as they benefited from their confiscation. They were also quite pleased with Germany's armed forces and the League of Nations as these controlled and contained Germany's power. However Britain didn't like what happened to German territories as they felt that these were too harsh. The Treaty of Versailles was unfair because of the harshness of the treaty terms although the media has distorted the fact that Germany is not as badly off as it seems. All nations disagreed over many points of the treaty and had to make many concessions in order to appease other nations. For example Wilson gave way to France concerning the Rhineland and the Saar coalfields, therefore Britain and France gave USA what they wanted, self determination in Eastern Europe. Therefore not all nations could ever be completely satisfied. ...read more.