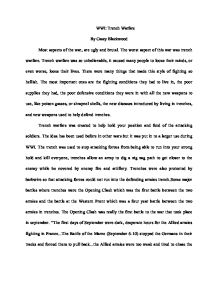 Trench warfare. Trench warfare was created to help hold your position and fend of the attacking soldiers. The idea has been used before in other wars but it was put in to a larger use during WWI.

WWI: Trench Warfare By Casey Blackwood Most aspects of the war, are ugly and brutal. The worst aspect of this war was trench warfare. Trench warfare was so unbelievable, it caused many people to loose their minds, or even worse, loose their lives. There were many things that made this style of fighting so hellish. The most important ones are the fighting conditions they had to live in, the poor supplies they had, the poor defensive conditions they were in with all the new weapons to use, like poison gasses, or shrapnel shells, the new diseases introduced by living in trenches, and new weapons used to help defend trenches. Trench warfare was created to help hold your position and fend of the attacking soldiers. The idea has been used before in other wars but it was put in to a larger use during WWI. The trench was used to stop attacking forces from being able to run into your strong hold and kill everyone, trenches allow an army to dig a zig zag path to get closer to the enemy while be covered by enemy fire and artillery. Trenches were also protected by barbwire so that attacking forces could not run into the defending armies trench.Some major battles where trenches were the Opening Clash which was the first battle between the two armies and the battle at the Western Front which was a four year battle between the two armies in trenches. ...read more.

was first used by the German Army in September 1917. It was one of the most lethal of all the poisonous chemicals used during the war. It was almost odorless and took twelve hours to take effect. Yperite was so powerful that only small amounts had to be added to high explosive shells to be effective. Once in the soil, mustard gas remained active for several weeks. The skin of victims of mustard gas blistered, the eyes became very sore and they began to vomit. Mustard gas caused internal and external bleeding and attacked the bronchial tubes, stripping off the mucous membrane. This was extremely painful and most soldiers had to be strapped to their beds. It usually took a person four or five weeks to die of mustard gas poisoning."(http://www.spartacus.schoolnet.co.uk/FWWmustard.htm) Hand grenades were brought in to the war from the start, Germans knew that trench warfare was going to be used and prepared for it by making hand grenades to blow up people in trenches, the Allies had not anticipated the large use of trench warfare and had to improvise the making of them, "Germany was well prepared for trench warfare in 1914, having produced quantities of many types of grenades as early as 1913. The Allies had failed to foresee the extended use of hand grenades and were forced to hastily construct improvised types. During the next three years hand grenade design progressed from crude bombs to refined weapons." ...read more.

The Machine gun was another weapon used to defend trenches with its firing rate and its caliber size trenches had no problems mowing down the opposing army when they ran at the trench, "The Germans usually placed machine guns by themselves outside the frontline trenches in pairs to avoid destruction by the artillery preparations."(Tucker, Spencer C.) The machine gun let the people in the trenches stop rushing troops in no mans land by firing large magazines of ammo and at a faster rate then regular guns.The bayonet was already invented at this time but was used to defend the trenches if they got involved in close quarters combat, it tended to be used the least out of the three just because the blade was to long and for them to use them as close as they were was hard, so the soldiers tended to use their knives for close encounters. But never the less the bayonet was used to keep rushing troops out of the trenches by stabbing them before they made it in the trenches. With these new innovations to WWI, trench warfare became a hellish waiting game between the two armies. WWI was a war full of poor fighting conditions, not enough supplies, and new weapons that caused deaths for people to be just like torture. The very idea of this war is horrible and should have never taken place. War is a horrible thing that should be avoided by all of the countries. ...read more.