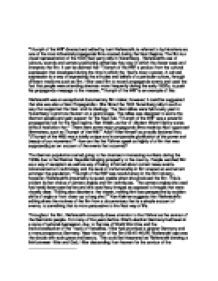 "Triumph of the Will" directed and edited by Leni Riefenstahl, is referred to by historians as one of the most influential propaganda films created during the Nazi Regime. The film is a visual representation of the 1934 Nazi party rally in Nuremberg. Riefenstahl's use of colours, sounds and camera positioning enhances they way in which the viewer sees and interprets the film. It can be claimed that "Triumph of the Will" a product from the cultural expression that developed during the time in which the Nazi's rose to power. A cultural expression is a way of expressing the attitudes and beliefs of a particular culture, through different mediums such as film. Hitler used film to record propaganda events and used the fact that people were attending cinemas more frequently during the early 1930's, to push his propaganda message to the masses, "Triumph of the Will" is an example of this. ...read more.

"Editing also disorients the viewer, making him lose perspective by sudden shifts of angle or from close-up to long shot."3 Ken Kelman suggests that Riefenstahl's editing alters the motives of the film from a documentary that is a simple account of events, to something that is more persuasive to the Nazi way of life. Throughout the film, Riefenstahl constantly draws attention to the F�rhrer as the saviour of the Germanic people. For many of the years before Hitler's election Germany had been in a state of national depression, due to the loss of World War One and the institutionalisation of the Treaty of Versailles. Hitler had promised a greater Germany and a more prosperous Germany. Near the start of the film (45:45-46:24) Riefenstahl captures the clouds with such grace and beauty. This could be interpreted as Riefenstahl drawing a link between Hitler and God; Hitler descending from heaven for the saviour of the Germans. ...read more.

"Triumph of the Will" was manufactured to give hope to the German people and put faith into the Nazi rule. The film captured the Nuremberg rally in a light that clouded many peoples proper opinions. It was a magnificent film, but at the same time an exceptional acquisition for Nazi propaganda. In the film Riefenstahl used many film techniques that were "unheard" of at the time and she revolutionised the film industry in this way. She composed an exemplarily film, on behalf of the Nazi's, that brought hope to many Germans who had been disheartened and lost their sense of nationalistic pride, however it also blinded many to what the Nazi's were truly capable of. The Nazi party utilised the increasing numbers, who were going too see films, to escape the melancholia that had surrounded the German people for the past 15 years to push the Nazi propaganda to more people then ever before. ?? ?? ?? ?? ...read more.