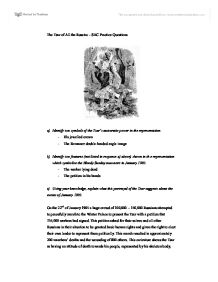 The Tsar of All the Russias - SAC Practice Questions a) Identify two symbols of the Tsar's autocratic power in the representation - His jewelled crown - The Romanov double-headed eagle image b) Identify two features (not listed in response a) above) shown in the representation which symbolise the b****y Sunday massacre in January 1905. - The worker lying dead - The petition in his hands c) Using your knowledge, explain what this portrayal of the Tsar suggests about the events of January 1905. On the 22nd of January 1905 a huge crowd of 100,000 - 150,000 Russians attempted to peacefully march to the Winter Palace to present the Tsar with a petition that 135,000 workers had signed. ...read more.

This caricature shows the Tsar as having an attitude of death towards his people, represented by his skeleton body, still clutching his sceptre and wearing his royal garb. The artist has also drawn the petition the marchers aimed to present to the Tsar abnormally large, suggesting it was of great importance. The event of b****y Sunday was important because it was a turning point in the relationship the Tsar had with the people of Russia. Their view of him changed from their "Little Father" to "Nicholas the b****y" and their trust and respect for their leader was forever damaged. ...read more.

Historian Michael Lynch contends that even though the Tsar wasn't even there at the time of the Massacre and he was not at fault, the events which took place "gravely damaged the traditional image of the tsar..." Richard Malone, however, criticises the Tsar for not considering the requests in the petition and responding with violence. He does share the same opinion with Lynch that the significance of this event was great because the breakdown of trust between the Tsar and his people began here. Because this illustration is essentially a piece of propaganda it is not a reliable source in understanding the Tsar's role in the b****y Sunday Massacre. ?? ?? ?? ?? ...read more.