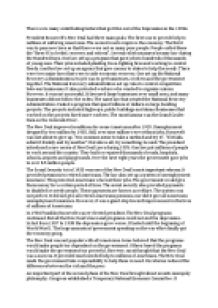 USA in the 1930s- Ending the Great Depression

﻿There were many contributing factors that got USA out of the Depression in the 1930s. President Roosevelt?s New Deal had three main goals. The first was to provide help to millions of suffering Americans. The second was to improve the economy. The third was to pass new laws so that there were not so many poor people. People called these the ?three R?s of relief, recovery and reform?. Several relief measures became law during the Hundred Days. One law set up a program that gave jobs to hundreds of thousands of young men. Their jobs included planting trees, fighting fires and working to control floods. Another law set up an agency that gave money to states to help the needy. There were two major laws that were to aide economic recovery. One set up the National Recovery Administration. Its job was to get businesses, workers and the government together. The National Recovery administration set up rules to control competition between businesses. It also protected workers who wanted to organize unions. However, it was not successful. It favoured large businesses over small ones, and many businesses did not follow the codes. ...read more.

But by the time action could take place in order to provide some assistance, the country was again at war, and there was little interest or time in enacting new legislation. Franklin Delano Roosevelt was the most towering president of the twentieth century. He changed the relationship of government to the American people. Before 1933, Americans had not looked for help of any kind. Because of Roosevelt and his New Deal, however, Americans came to see the government as a potential employer and provider. The New Deal brought jobs and relief to millions of Americans. It did not end the depression though. The depression ended because of World War II. During the war the nation?s economy was devoted to the production of weapons and other materials necessary to win the conflict. Roosevelt presided over an enormous change in American and the presidency of the United States. The war only helped to increase the size and power of the presidential office. The presidency would never be the same nor would the world. In the late 1930s, the Great Depression was weakening, but many Americans were still poverty stricken. ...read more.

The ten million American men that went into the service as soldiers, medics, mechanics and many other jobs. Which also meant the demand at home was getting bigger, America needed more factory workers, electricians and plumbers. This gave opportunity for America?s unemployment to be cut down by a huge amount. After the war the rest of the world was badly damages and the American economy set the pace for the rest of the world. Source 11 also backs the reason up how the Second World War made a positive impact on the depression. The graph shows that unemployment was at and all time high and the percentage of labour forced unemployment when the new deal first started was at 24.9% but when America entered the was unemployment fell all the way to 9.9%, then a year later fell again to 4.2%. The graph also show that just before the war started production started to rise slowly and steadily. At a huge scale, the war not only ended the Great Depression, but created the conditions for productive collaboration after the war between the government and labor. The U.S. came out of the war completely fine and economically strengthened by wartime industrial expansion, which placed the United States at absolute and relative advantage over both its allies and its enemies. ...read more.