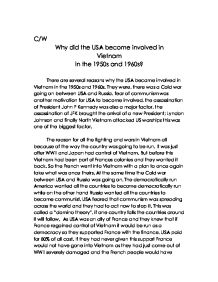 C/W Why did the USA become involved in Vietnam in the 1950s and 1960s? There are several reasons why the USA became involved in Vietnam in the 1950s and 1960s. They were, there was a Cold war going on between USA and Russia, fear of communism was another motivation for USA to become involved, the assassination of President John F Kennedy was also a major factor, the assassination of JFK brought the arrival of a new President; Lyndon Johnson and finally North Vietnam attacked US warships this was one of the biggest factor. The reason for all the fighting and wars in Vietnam all because of the way the country was going to be run. It was just after WWII and Japan had control of Vietnam. But before this Vietnam had been part of Frances colonies and they wanted it back. ...read more.

Soon France had enough and was forced to retreat after defeat at the Battle of Dien Bien Phu by the North Vietnamese army (Viet Minh) which were led by a man called Ho Chi Minh who was a communist leader. Following this, the Geneva Conference separated the country into two. North Vietnam set up by Ho Chi Minh and South Vietnam led by the American-backed Ngo Dinh Diem. America then turned its attention towards South Vietnam and in helping them to defeat the Viet Minh. Ngo was an increasingly embarrassing ally and was hated by most. Ngo's opponents in the South set up the National Liberation Front. Its military wing, the Vietcong, was supported with troops and weapons supplied by Ho Chi Minh's government. America had sent in military advisors to the South Vietnamese army as they were in disarray, the advisors sent in by President J F Kennedy help the South Vietnamese army get organised and teach them about tactics. ...read more.

The aim was to cut off supplies from the North to the Vietcong and the demoralise the North. But the raids failed to achieve either goal. USA was very determined to win this war and at one point the number of troops in Vietnam reached a peak at 542 000 in 1969. The USA used chemicals like Agent Orange which caused distraught throughout Vietnam and caused mass destruction to the lives of the Vietnamese people, still till this day. President Johnson, after meeting top advisers, announced fresh peace negotiations and the reduction of air strikes in North Vietnam. He also made the decision not to stand for re-election that year. It was the beginning of the long process of American withdrawal from Vietnam. In 1973 a peace treaty was signed by North Vietnam and the USA. So the main reason in my opinion that USA got involved in Vietnam is the fear of communism spreading around the world and making its way into America. Dalvir Dhillon 11SZ ...read more.