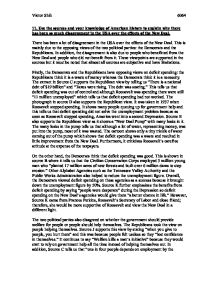 Use the sources and your knowledge of American history to explain why there has been so much disagreement in the USA over the effects of the New Deal.

11. Use the sources and your knowledge of American history to explain why there has been so much disagreement in the USA over the effects of the New Deal. There has been a lot of disagreement in the USA over the effects of the New Deal. This is mainly due to the opposing views of the two political parties: the Democrats and the Republicans. In addition, the disagreement is also due to people who benefitted from the New Deal and people who did not benefit from it. These viewpoints are supported in the sources but it must be noted that almost all sources are subjective and have limitations. Firstly, the Democrats and the Republicans have opposing views on deficit spending: the Republicans think it is a waste of money whereas the Democrats think it is a necessity. The extract in Source C supports the Republican view by telling us "There is a national debt of $19 billion" and "Taxes were rising. The debt was soaring." This tells us that deficit spending was out of control and although Roosevelt was spending there were still "11 million unemployed" which tells us that deficit spending had not worked. The photograph in source D also supports the Republican view. ...read more.

The Republicans took the view on people helping themselves. Source J supports this view by stating "when you give to people, you hurt them" and this was because people felt useless so they "lost confidence in themselves." It continues to say "Welfare kills a man's initiative" because they would start to rely on government help all the time instead of helping themselves out. In addition, Source C tells us that "one in four people depends on employment by the government" which further emphasizes the fact that people rely on the government too much and do not help themselves. However, the Democrats oppose this view and agree that the government should help out the people when they need help. Source K tells us that during the Depression "people were desperate" because they were going through poverty. Therefore, with the introduction of the New Deal, people had a "better chance in life" and were able to earn a living again. Source F further highlights the point of an active government by showing Roosevelt as a strong man clearing out all the rubbish. This tells us that with his enthusiasm and new programmes, millions of Americans were able to rebuild their lives by joining these public works programmes. ...read more.

He did this because millions of unemployed Americans found jobs through his public works programmes and earned a good living from it. Some Blacks were even promoted to senior posts in the New Deal's agencies and women were also promoted to senior positions in the government. Furthermore, if the Second World War did dawn on Americans when they were in Depression, they would certainly not be ready to go to war yet. So the Democrats viewed the New Deal as a success because it saw many improvements in America. Ultimately, there is a disagreement on the effects of the New Deal and this is largely due to the opposing views in politics. The Republicans were firmly against the New Deal and felt the New Deal was doing too much for Americans whereas the Democrats agreed that the New Deal was a success for America. It largely depends on people's viewpoints towards the role of government. If you agree that the role of the government is to help people (intrusive), then one would support the New Deal. If not, then the New Deal would be viewed as an autocratic, communist programme which should be resisted. (Word Count: 1194 words) ?? ?? ?? ?? Victor Shih 6064 ...read more.