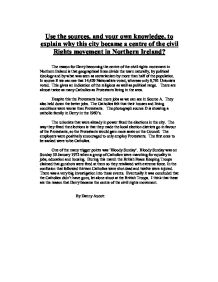 Use the sources, and your own knowledge, to explain why this city became a centre of the civil Rights movement in Northern Ireland?

They also held down the better jobs. The Catholics felt that their houses and living conditions were worse than Protestants. The photograph source D is showing a catholic family in Derry in the 1960's. The unionists that were already in power fixed the elections in the city. The way they fixed the elections is that they made the local election districts go in favour of the Protestants, so the Protestants would gain more seats on the Council. ...read more.

During this march the British Peace Keeping Troops claimed that gunshots were fired at them so they retaliated with extreme force. In the confusion that followed thirteen Catholics were shot dead and twelve were injured. There was a very big investigation into these events. Eventually it was concluded that the Catholics didn't have guns, let alone shoot at the British Troops. I think that these are the reason that Derry became the centre of the civil rights movement. By Danny Aucott ...read more.