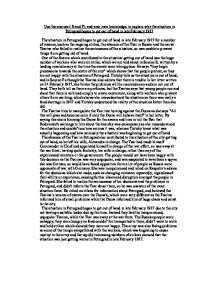 Use the sources ( E and F), and your own knowledge, to explain why the situation in Petrograd began to get out of hand in late February 1917

The Tsarina tries to manipulate the Tsar into turning against the Duma as she says "All this will pass and become calm if only the Duma will behave itself" in her letter. By saying this she is blaming the Duma for the events and tries to tell the Tsar that Rodzianko's warnings to him about the anarchy was unnecessary as she misunderstood the situation and couldn't see how serious it was, whereas Trotsky knew what was actually happening and how seriously the situation was beginning to get out of hand. The absence of the Tsar in Petrograd also contributed to the situation of the city getting out of hand, as he left his wife, Alexandra in charge. The Tsar had made himself Commander in Chief and appointed himself in charge of the war effort, so was away at the war front, leaving quite foolishly, his wife in charge, rather than any of the experienced ministers or the government. ...read more.

The situation in Petrograd began to get out of hand in late February 1917 due to the city not having a suitable leader during the time. Instead they had the inexperienced, unpopular Tsarina, while the Tsar was away at the war front. The Russian people were unhappy; they were hungry as food couldn't be transported to them, didn't want to work and held strikes which showed they were not happy. The army was also facing problems as some of the troops sympathized with the workers, which was beginning to cause mutiny in the army and the rapidly increasing numbers of strikers showed that the situation was just getting worse in Petrograd in late February 1917. ?? ?? ?? ?? ...read more.