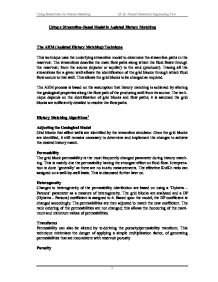 Using a Streamline-Based Model in Assisted History Matching The AHM (Assisted History Matching) Technique This technique uses the underlying streamline model to determine the streamline paths in the reservoir. The streamlines describe the main flow paths along which the fluid flows through the reservoir; from the source (injector or aquifer) to the sink (producer). Tracing all the streamlines for a given well allows the identification of the grid blocks through which fluid flow occurs to that well. This allows the grid blocks to be changed as required. The AHM process is based on the assumption that history matching is achieved by altering the geological properties along the flow path of the producing well from its source. The technique depends on the identification of grid blocks and flow paths; it is assumed the grid blocks are sufficiently detailed to resolve the flow paths. History Matching Algorithms1 Adjusting the Geological Model Grid blocks that affect wells are identified by the streamline simulator. Once the grid blocks are identified, it still remains necessary to determine and implement the changes to achieve the desired history match. Permeability The grid block permeability is the most frequently changed parameter during history matching. This is mainly due the permeability having the strongest effect on fluid flow. Interpretation is done 'generally' as there are no in-situ measurements. ...read more.

Even though a good match was achieved, a significant number of shale regions exist in the reservoir that limits the vertical connectivity of the field. The lowering of Kv/Kh ratio of individual grid blocks was consistent but time consuming. The reason behind my mentioning of the finite difference case is to show that even with the aid of AHM, working on a grid block model can achieve a relatively good match, but compared to the use of streamlines, this method is deemed very slow, hence, time consuming. Two examples of the application of AHM on finite difference models are discussed in SPE paper 490002. The first example it can be seen that decreasing the 'Dykstra - Parson' coefficient (DP), results in a more homogeneous distribution of permeability resulting in later breakthrough of injected water, and vice versa. This was applied to some of the wells in the example. A third of the wells had undergone an increase in the DP coefficient resulting in earlier breakthrough, which was observed in the reservoir. When AHM was applied, it took 6 iterations to achieve a reasonable match. A small improvement is observed by the match obtained through AHM, although it wasn't significant. The only significance was that the 6 iterations took a week to compute, compared to the 2 months required by traditional methods. ...read more.

For this continuation, a streamline pattern representative of flow for the whole reservoir was chosen. Improvements to particular wells were performed by changing the DP coefficients and pore volume. In this way, the heterogeneity around a well could be modified to improve well match. The field history match achieved was very good, see figure 03. Figure 02 - Streamline display showing individual Figure 03 - Saladin reservoir-field history wells and their Drainage areas1 match1 Summary of the Technique The AHM technique uses unique information contained within the streamlines to assist the traditional method of history matching. The first case discussed in the paper shows the utility of a heterogeneity renormalisation technique coupled with streamlines to affect a well-by-well history match. The second case, changes to Kv/Kh ratio can be quickly applied to achieve desired results. Although with the second method, alterations needed for individual grid blocks was very time consuming. Reducing the layering of the model did result in reducing time of simulation, but the match achieved was not as desired. The last case shows the extent of the usage of the finite difference model and how quickly streamlines with the aid of AHM, match can be achieved. In all three examples, the changes that were made were within general uncertainty of the initial data. This is the advantage of AHM: relatively modest changes are required to obtain a history match from a well constructed geological model. Using Streamlines for History Matching M. M. Ahmed Petroleum Engineering Yr 4 7 ...read more.