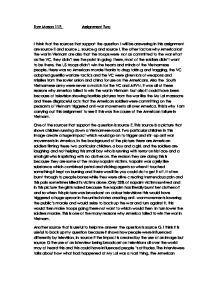 using the sources available, why did America loose to Vietnam?

Tom Mason 11E. Assignment Two I think that the sources that support the question I will be answering in this assignment are source E and source J, source g and source l. The other factors why America lost the war in Vietnam are also that the troops were not as committed to the war effort as the VC, they didn't see the point in going there, most of the soldiers didn't want to be there, the US troops didn't win the hearts and minds of the Vietnamese people, there was no American morale thanks to drug taking and fragging, the VC adopted guerrilla warfare tactics and the VC were given lots of weapons and missiles from the soviet union and china for use on the Americans. Also the South Vietnamese army were never a match for the VC and ARVN. It was all of these reasons why America failed to win the war in Vietnam but also it could have been because of television showing horrible pictures from the war like the My Lai massacre and these disgraceful acts that the American soldiers were committing on the peasants of Vietnam triggered anti-war movements all over America. This is why I am carrying out this assignment to see if this was the cause of the American failure in Vietnam. ...read more.

The interviewee talks about how what had happened at My Lai was a n**i thing. The American soldier talks about how nobody knew about it until it was investigated which was 1 year later. On that day the source tells me that 347 unarmed civilians were massacred and this interview was recorded on a day that the soldier was told about it and instantly he remembers what his friend told him when the soldier first found out, the thing that he didn't forget he was told was the fact that it was a n**i thing, how none of the soldiers going there went to be n**i's, he says how he and every one he knew went to be n**i's but yet it happened, basically he is saying to the American public that some events that took place in the war were nearly the same as events that lead on to world war two, Germans and n**i's slaughtering Jews in huge numbers, this would create an even bigger impact on the American public's minds as thousands of American soldiers lives were lost fighting these n**i's and now in another war the Americans were being n**i's, this would make the American public feel very strongly that the whole basis on America is really a huge lie, America can't make its mind up on whose the real enemy in the world, first it is the n**i's and then the American soldiers become the n**i's. ...read more.

In the scene it shows a great in-depth view of how the people against the war reacted and also how the government and police reacted. Also in the scene there is a very significant part to help me answer the question and that is that there is a media crew filming the event ready to broadcast it on the evening news and sell to the tabloids. It also shows how riots broke out and how brutal the police were to the protesters and this would make people think why they didn't want these sorts of things happening, maybe to stop them showing everyone how bad the war was. I think that the most important reason for the US failure is because of the failure to win the hearts and minds of the Vietnamese villagers but in my opinion the second most important reason is that people didn't want to go there after they had seen the brutality and carnage on colour television screens. This would have lowered the morale of the whole US army and would of made even more knock on effects, leading to marines taking drugs, being depressed and not doing as well as they should be, this would of lead to more lives lost and then in the end a surrender by the US. ...read more.