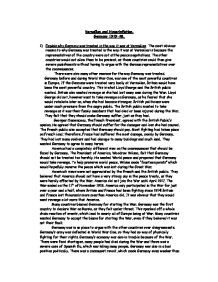 Versailles and Hyperinflation, Germany 1919-28. 1) Explain why Germany was treated in the way it was at Versailles. The most obvious reason to why Germany was treated in the way it was at Versailles is because the representatives of the country were not at the peace negotiations. The other countries would not allow them to be present, as these countries could then give severe punishments without having to argue with the German representatives over the consequences. There were also many other reasons for the way Germany was treated. Germany before and during World War One, was one of the most powerful countries in Europe. If the Germans were treated very badly at Versailles, Britain would have been the most powerful country. This is what Lloyd George and the British public wanted. Britain also wanted revenge as she had lost many men during the War. Lloyd George did not, however want to take revenge on Germany, as he feared that she would retaliate later on, when she had become stronger. British politicians were under much pressure from the angry public. The British public wanted to take revenge as it was their family members that had died or been injured during the War. They felt that they should make Germany suffer, just as they had. Georges Clemenceau, the French President, agreed with the British Public's opinion. He agreed that Germany should suffer for the damages and loss she had caused. The French public also accepted that Germany should pay. Most fighting had taken place on French land; therefore, France had suffered the most damage, mainly by Germany. They had lost many soldiers and had damage to many buildings and much land. They wanted Germany to agree to many terms. America had a completely different view on the consequences that should be faced by Germany. The President of America, Woodrow Wilson, felt that Germany should not be treated too harshly. ...read more.

Food poisoning became common because people were eating spoiled foods, as they were starving. People could easily die from these conditions, as German medical care was not as good as it was before the economic crisis. Even though some people benefited from the economic crisis in Germany, millions did not. The amount of people earning lots of money and being able to afford food and have good hygiene standards was not enough to equal out to the amount of people who were unemployed, homeless, starving and dying from disease. Versailles and Hyperinflation, Germany 1919-28. 3) Why was there an economic crisis in Germany in 1923? There are several causes to the economic crisis in Germany in 1923. The Great War contributed greatly to this, but Germany's problems had begun even before the War had started. In 1914 the German Government decided to come off of the 'Gold Standard'. This was a system in which every bank note had an equivalent sum of gold, kept in the vaults of the German Central Bank. You could go to the bank and would be able to swap your note for gold, although people would normally use the notes to buy things, like an IOU, as it was easier to do this than to use pieces of gold. When the First World War began in 1914, Germany needed more money to pay for food and weapons. The German Government found that the easiest way to obtain more money was to print more notes. This decreased the actual value of the money, as there was more money in circulation. During the War there were food shortages, this meant that there was too few goods to buy for the amount of money that there was in circulation. We can see that inflation occurred, because of the drastic fall in the value of money. In January 1921, there were 64 marks to the dollar, by November 1923; this amount had risen drastically to 4.2 trillion marks to the dollar! ...read more.

Germany also signed the Locarno pact with France, Belgium, Britain and Italy. The pact was an agreement that the countries keep the existing borders between Germany, France and Belgium. At this Locarno Pact agreement, Germany was involved in the negotiations as an equal to the other countries. This was a great success, showing that Germany had managed to remove some of the bitterness left over from the War. It was made even clearer that Germany was successful in removing the bitterness left from the war when in 1926 Germany was given a permanent seat on the council of the League of Nations. Even though Germany had had all of these successes, she was still not completely stable. Germany had become dangerously dependant on the American boom of the 1920's, through loans and trade. If America was to have any future financial problems, which it did with the economic depression of 1929, then Germany would also be badly affected by it. As much as it seemed that Germany had removed bitterness between foreign countries, she still had not. Although they had agreed with Stresemann's plans and pacts, they had still not been won over. Even though the German people were relatively stable and did not need to support extremist parties, some still agreed with their ideas, so still supported them. The Munich Putsch seemed to be a problem for Hitler and the Nazis but was not completely. Although Stresemann managed to overcome the problem in the short term, he made it worse in the long term because he enabled Hitler to produce plans, which were more likely to work. Extreme parties like the Nazis opposed Stresemann. They had Storm Troopers that encouraged support for the Nazis. If you did not support the Nazis, the Storm Troopers would beat you up and damage your property. Even though the political situation had been partially stabilised, it was on the surface only. Stresemann needed to conquer a lot more problems, especially the problem of opposition extremist parties, before the political situation was safely stabilised and there was no longer a threat of revolts, uprisings etc. ...read more.