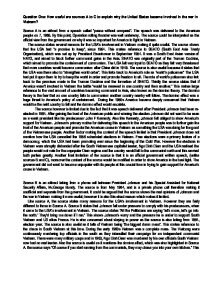 Question One: How useful are sources A to C to explain why the United States became involved in the war in Vietnam? Source A is an extract from a speech called "peace without conquest". The speech was delivered to the American people on 7, 1965. By this point, Operation rolling thunder was well underway. The source could be interpreted as the official view from the government on why it was so important for America to fight in Vietnam. The source states several reasons for the USA's involvement in Vietnam making it quite useful. The source shows that the USA had "a promise to keep", since 1954. This makes reference to SEATO (South East Asia Treaty Organisation), which was set up by President Eisenhower in September 1954. It was a South East Asian version of NATO, and aimed to block further communist gains in the Asia. SEATO was originally part of the Truman Doctrine, which aimed to promote the containment of communism. The USA felt very loyal to SEATO as they felt very threatened that more countries would become communism after China did in 1949. The source is also useful because it states that the USA was there also to "strengthen world order". This links back to America's role as "world's policemen" The USA had put it upon them to try to keep the world in order and promote freedom to all. ...read more.

He is also concerned about staying in power as the source is also taking from 1964, election year. The source is also useful as it tells of Vietnam being "the biggest d**n mess". This makes reference to the chaos in South Vietnam at this time. During the early 1960s Vietnam was a complete mess. The Vietcong were continuously murdering top officials in the south as they intensified their campaign for an independent communist Vietnam. There were many military coups and in 1963, Ngo Dinh Diem was murdered by his own officials South Vietnam now had no real leader. Also the source is useful as it mentions the domino effect, which was also highlighted in Source A. the source says "Of course if you start running from the communists, they may chase you into your own kitchen." This shows how Johnson was so concerned about the rapid spread of communism and the Domino effect; he was even beginning to worry that Western Europe would begin turning to communism. Even though it may be suggested that because the source was taken from a private conversation it is more useful than Source A. the source also has many limitations. The source is taken from election year election year, this was also the year when President Johnson gave his great society speech. Due to this Johnson is very aware of his public image at this time, as he did not want to loose his place in the White House. ...read more.

Because Chomsky is looking back in hindsight it makes the source limited and 'its official truth now' meaning that he is sympathising with the US public as they all were now aware of the Vietnam true nature of the war. In conclusion all the sources suggest reason such as the domino effect, America's role as world policeman and SEATO and for the USA's involvement in the War. Each source is useful and limited, but out of all the sources, source B is the most useful. Source A is the official reason for why the USA became involved and was taken the election year and therefore would contain limitations in order to please the American public and win the election. Source B on the other hand is from the same election year but is the unofficial reasons. The source is taken from a private conversation and underlines the pressures Johnson had to face, from the president himself. Source C is also limited because it is taken after the war and could be argued that Chomsky was highly influenced by his knowledge. Source B is the most useful to explain why American became involved in the war because it gives the most truthful view from Johnson to why the USA entered Vietnam. However from the sources it becomes evident that the threat of communism spreading across Asia and the repercussions of the domino theory are the most important reason the USA entered Vietnam, rather than the wanting to promote freedom and preserve the interest people of Vietnam. ...read more.