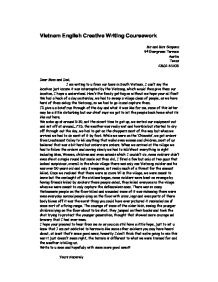 Vietnam English Creative Writing Coursework Mr and Mrs Simpson 94 Evergreen Terrace Austin Texas CMD1-NUO8 Dear Mom and Dad, I am writing to u from our base in South Vietnam, I can't say the location just incase it was intercepted by the Vietcong, which would then give them our location, I hope u understand. How's the family getting on without me hope your all fine? We had a heck of a day yesterday, we had to sweep a village clean of people, as we have herd of them aiding the Vietcong, so we had to go in and capture them. I'll give u a brief run through of the day and what it was like for me, some of this letter may be a little disturbing but our chief says we got to let the people back home what its like out here. ...read more.

When we arrived at the village we had to follow the orders and moving slowly we had to kill/shoot everything in sight including Men, Women, children and even animals which I couldn't do, some soldiers didn't even shoot a single round but made out they did, I fired a few but only at two guys that looked suspicious, overall in the whole village there was only one Vietcong soldier and he was over 50 years old and only 3 weapons, not really much of a threat for the amount killed. Once we realised that there were no more VC in the village, we were meant to leave but the onslaught of the civilians began, some soldiers were bent on revenge by having friends killed by soldiers these people aided, they killed everyone in the village when we were meant to only capture the defenceless ones. ...read more.

The courage of some of the older kids, seeing the younger children lying on the floor about to be shot, they jumped on their backs and took the shot trying to protect the younger generation, thought that showed more courage and bravery that I had ever seen. I hope your pleased to hear from me so as you can still have a little hope, just to let u know that I am not addicted to herrowin like some other soldiers you may have heard about, at least that's some good news, honestly I don't think that we're going to win this war it just doesn't seem right, the terrain is different to what we were trained for and the weather is killing us. Write to u soon and hopefully with some more good news? Yours sincerely Private J.Simpson P.S. I miss you all and really want to come home ...read more.