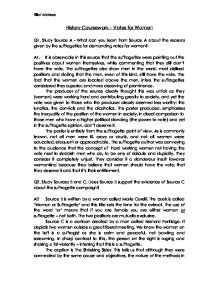 History Coursework - Votes for Women Q1. Study Source A - What can you learn from Source A about the reasons given by the suffragettes for demanding votes for women? A1. It is observable in this source that the suffragettes were pointing out the positives about women themselves, while commenting that they still don't have the vote. The suffragettes also show men in the worst, most disliked positions and stating that the men, even of this kind, still have the vote. The fact that the women are located above the men, infers the suffragettes considered they superior, and more deserving of prominence. The producer of the source clearly thought this was unfair as they (women) were working hard and contributing greatly to society, and yet the vote was given to those who the producer clearly deemed less worthy: the lunatics, the convicts and the alcoholics. The poster produced, emphasises the inequality of the position of the women in society, in direct comparison to those men who have a higher political standing (the power to vote) and yet in the suffragette opinion, don't deserve it. The poster is entirely from the suffragette point of view. As is commonly known, not all men were ill, crazy or drunk, and not all women were educated, eloquent or approachable. The suffragette author was conveying to the audience that the concept of hard working women not having the vote next to slobbish men who do, to be one of ridicule and stupidity. They consider it completely unjust. ...read more.

In order to proceed with these, the government needed to win the election of 1910 and so therefore cast aside the shrill cries of votes for women, as they thought it would repel potential voters. There was almost a civil war in Ireland over the topic of Home Rule and this overshadowed the suffrage arguments. Also feuding, were the House of Commons and the House of Lords. This threatened to bring down the government and therefore was of greater concern than a noisy group of women who wanted something they shouldn't have. As 1914 crept closer, war was looking imminent and this was a top priority for the government. They didn't want an outbreak of conflict which would be both physically and economically draining on the country and it's resources. However with the outbreak of war in 1914, the argument of female suffrage wasn't abandoned, merely put aside for the time being. The big suffragette voice, Mrs Pankhurst, declared her full support towards the war effort of Great Britain. The men were being drafted to the frontline in increasing quantities, so the women stepped in to replace the loss of manpower - this was their chance to prove themselves as worthy as men. Q4. Study Sources F & G How useful are these two sources as evidence for the contribution of women to the war effort in the years 1914-1918? A4. Source F is a poster produced by the government in the middle of the war, specifically 1916. ...read more.

As mentioned previously, these women went from violent protesting to hard wartime working, and this would have understandably earned the respect of the government. However, it was beneficial for the government to exaggerate women's war work as they needed to increase recruitment figures into industry. It was also mutually advantageous for the women's organisations as they were trying to enforce their case for enfranchisement. It is arguable as to whether women would have obtained voting rights in 1918 had it not been for the men who had been fighting with the armed forces had lost their right to vote because of their none-residency during the war and this situation had to be overturned immediately. It was consequently fairly straightforward to add an amendment favourable to women, to the bill being pushed forward. So this fact is unsure as to the validity in the statement, as women only got the vote when an opportunity arose to slip in a policy change. In consideration of all these points, I disagree with the statement as it says that it was the work that got women the vote. Well, it wasn't just the work, there was Women worked exceptionally hard during the war and outstandingly quashed some of the opposition's arguments. This undoubtedly had influence in the decision to give votes to certain women. It was a massive step forward and so had therefore had massive momentum behind it. Yes, the work provided some of this force, but there were many other factors that contributed. ?? ?? ?? ?? Elliot Mateus ...read more.