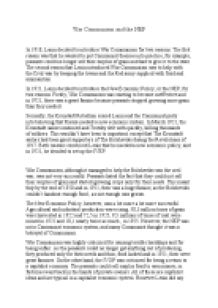 War Communism and the NEP

﻿War Communism and the NEP In 1918, Lenin decided to introduce War Communism for two reasons. The first reason was that he wanted to put Communist theories into practice, for example, peasants could no longer sell their surplus of grain and had to give it to the state. The second reason that Lenin introduced War Communism was to help with the Civil war by keeping the towns and the Red army supplied with food and ammunition. In 1921, Lenin decided to introduce the New Economic Policy, or the NEP, for two reasons. ...read more.

Both reasons convinced Lenin that he needed a new economic policy, and in 1921, he decided to set up the IVEP. War Communism, although it managed to help the Bolsheviks win the civil war, was not very successful. Peasants hated the fact that they could not sell their surplus of grain and started growing crops only for their needs. This meant thqt by the end of 1920 and in 1921, their was a huge famine, as the Bolsheviks couldn?t handout enough food , as not enough was grown. ...read more.

War Communism was highly criticized for causing terrible hardships and for being unfair. As the peasants could no longer get anything out of producing, they produced only for their needs and thus, food lacked and in 1921, their were great famines. On the other hand, the IVGP was criticized for being a return to a capitalist economy. The peasants could sell surplus food to earn money, in factories went back in the hands of private owners. All of these are capitalist ideas and are typical in a capitalist economic system. However Lenin did say NGP was temporary , but in 1924? Shortly after instoring NEP, he died, so no one knows how long he had meqnt IVEP to continue. ...read more.