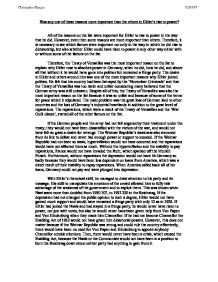 Was any one of these reasons more important than the others in Hitler's rise to power?

Was any one of these reasons more important than the others in Hitler's rise to power? All of the reasons on the list were important for Hitler to rise to power in the way that he did. However, even then some reasons are more important than others. Therefore, it is necessary to see which factors were important not only in the way in which he did rise to dictatorship, but also whether Hitler could have risen to power in any other way either with or without some of the factors on the list. Therefore, the Treaty of Versailles was the most important reason on the list to explain why Hitler rose to absolute power in Germany, when he did, how he did, and above all that without it he would have gone into politics but remained a fringe party. The desire in Hitler and others around him was one of the most important reasons why Hitler joined politics. ...read more.

When America called back all of her loans, Germany could not pay and were plunged into depression. With Hitler's rhetorical skill, he managed to draw attention to his party and its message. His skill to manipulate the emotions of the crowd allowed him to fully tale advantage of the weakness of the government and to exploit them. This was shown when Nazi seats more than doubled from 1930 107, to 1932 230 in the Reichstag. If the depression had not changed the public opinion to such a degree, Hitler would not have gained much support and would have remained a fringe party with only 12 as in 1928. If Hitler had joined the Nazis and had stayed in a fringe party, he would never have risen to power, not just with votes, but also he would never have been given help from Von Papen and Von Hindenburg when they made him Chancellor. If he had not become Chancellor the Enabling Act of 1933 would not have given him didactorial powers. ...read more.

Therefore, he would rise to power, but not to the power of dictator. The Munich Putsch made very little difference to Hitler's rise to power because although it gave him publicity and his party's seats in the Reichstag increased to 32 seats but rapidly dropped to 14 seats seven months later. Despite this, even though these factors were unimportant they all set up the scene for Hitler to rise to power easily and made it certain that he would rise to absolute power. Therefore, the level of reparations, which were decided in 1921 and were a direct result of the Treaty of Versailles, was the most important factor for Hitler's rise to power. That was the one and only thing, which caused all of the other factors on the list. Without their cause, events cannot take place, and absolutely nothing in Germany would have been the same if the reparations had been less. If the national atmosphere was not right, which it was in reality, Hitler could never have come to power not only in the way in which he did, but not at all. ...read more.

This is a very well focused and detailed response that offers persuasive analysis throughout. By being clear about the links between factors, the author offers a comprehensive explanation of Hitler's rise. 5 out of 5 stars.