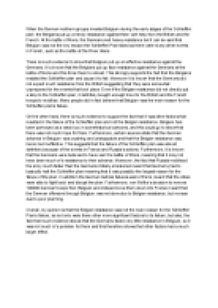 Was Belgian resistance the main cause of the failure of the Schlieffen Plan?

Many people did in fact believe that Belgium was the main reason for the Schlieffen plan?s failure. On the other hand, there is much evidence to support the fact that it was other factors that resulted in the failure of the Schlieffen plan and not the Belgian resistance. Belgium has been portrayed as a weak boy in somehistorical cartoons, and this could go to show that there was not much hope for them. Furthermore, certain sources state that the German advance in Belgium was crushing and unstoppable and that the Belgian resistance was heroic but ineffective. This suggests that the failure of the Schlieffen plan was almost definitely because of the events in France and Russia?s actions. ...read more.

In addition the German tactical failures east of Paris, meant that the Allies were able to fight back and disrupt the plan. Furthermore, von Moltke?s decision to remove 100000 German troops from Belgium and instead move them down into France meant that the German offensive through Belgium was not slow due to Belgian resistance, but moreso due to poor planning. Overall, my opinion is that the Belgian resistance was not the main reason for the Schlieffen Plan?s failure, as not only were there other more significant factors to its failure, but also, the fact that much evidence shows that the Germans faced very little resistance in Belgium, so it was not much of a problem for them and this therefore shows that other factors had a much larger effect. ...read more.