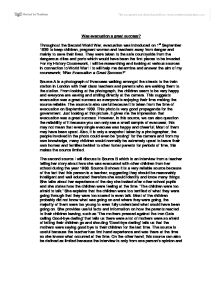 Was Evacuation A Success

Was evacuation a great success? Throughout the Second World War, evacuation was introduced on 1st September 1939 to keep children, pregnant women and teachers away from danger and mainly to save their lives. They were taken to the safe countryside from the dangerous cities and ports which would have been the first places to be invaded. For my History Coursework, I will be researching and looking at various sources in connection to World War II to will help me determine and answer the aim of my coursework; 'Was Evacuation a Great Success?' Source A is a photograph of Evacuees walking amongst the streets to the train station in London with their class teachers and parents who are walking them to the station. From looking at the photograph, the children seem to be very happy and everyone are waving and smiling directly at the camera. This suggests evacuation was a great success as everyone is enjoying their time making the source reliable. The source is also useful because it is taken from the time of evacuation on September 1939. This photo is very good propaganda for the government. Just looking at this picture, it gives me the impression that evacuation was a great success. However, in this source, we can also question the reliability of it because you can only see a small sample of evacuees; this may not mean that every single evacuee was happy and cheerful; Most of them may have been upset. ...read more.

The sentence states: 'Thank You, Foster Parents... we want more like you!' it is deliberately printed in bold to make it more eye catching and also to appeal to people about evacuation. Especially the words 'Thank You' appreciates and gives praise to them. Another reason why it is useful is because it is taken from the time. On the other hand, it is also limited because it is Government Propaganda persuading the nation to foster children and is biased because evacuation was a Government Project and therefore was just their opinion and not others. The language from the text underneath the image was also exaggerated and over the top, this would be unreliable for a historian. Source E is an interview with a father of a seven year old; he discusses the subject of evacuation and also his own opinion of it. The source shows the parent's fears of letting his son go; he says 'They can't be looked after there where they're sending them.' He is stating that the evacuees cannot be properly looked after at the place where the children are being sent to be evacuated. He also has an idea of the country life; he thinks it is 'poor' and he talks about his son getting looked after and decides it would better for his son to stay at home 'They've nothing there; they were starving there before the war.' ...read more.

After the war had ended 70,000 people were killed. In conclusion, 'Was Evacuation a Great Success?' In my opinion: Yes. I believe Evacuation was successful because it had saved many young lives; it took children out of and away from harm and danger. Even though a lot of money had been used from the government, it was all for a good cause and most importantly, it was worth it. It was also a great adventure for many evacuees as they had experienced loving and caring families, a nice and clean house with a comfortable bed to sleep, enough food to last them until the next month, new clothes for them to wear, made many new friends; it was definitely a wonderful and an incredible journey. Children were also known as the future generation of Britain, one of many major reasons why the government wanted to keep them safe and secure. If children had been killed this would have a huge affect on the moral of the country. Many men would not have wanted to leave the country to fight wanting to stay and protect their families. Mothers would not have wanted to work in the munitions industry and it may also have turned people against the war and the government could have lost their support. So if evacuation had not been established during World War II or not become as successful, Britain would not be as it is today. ?? ?? ?? ?? ...read more.