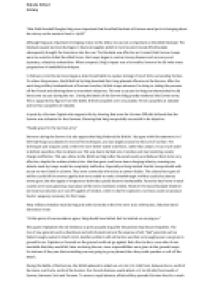 Was Field Marshall Douglas Haig more important that the allied blockade of German naval ports in bringing about the victory on the western front in 1918?

﻿Natalie Gilbert History ?Was Field Marshall Douglas Haig more important that the allied blockade of German naval ports in bringing about the victory on the western front in 1918?? Although Haig was important in bringing victory to the Allies, he was not as important as the allied blockade. The blockade caused German shortages in food and supplies (which in turn lowered morale.)The blockade subsequently brought the Americans into the war. The blockade was effective as it meant that German troops were too weak to defeat the allied forces, the troops began to contract many diseases such as scurvy and dysentery, related to malnutrition. When compared, Haig?s impact was a lot smaller; however he did make many progressions in battlefield techniques. In February 1916 the Germans began a determined battle to capture strategic French forts surrounding Verdun. To relieve the pressure, the British led by Haig launched their long-planned offensive at the Somme. After the week long artillery bombardment of German trenches, British troops advanced. In doing so, taking the pressure off the French and allowing them to meet their objectives. This was a success for Haig and showed that he did have some success during the war. During the battle of the Somme Haig greatly weakened the German army. This is supported by figures from the Battle. British Casualties were at 420,000, French casualties at 200,000 and German casualties at 500,000. A quote by a German Captain also supports this by showing that even the German Officials believed that the Somme was a disaster for the Germans. Showing that Haig was partially successful in his objective: ?Muddy grave for the German army? However during the Somme it is also argues that Haig hindered the British. I do agree with this statement. As I feel that Haig was outdated in most of his techniques, and was largely unused to this sort of warfare. The techniques and weapons used at the time were better suited to defence, rather than attack. ...read more.

Another problem with old tactics was that not enough power was given to ground forces. Captains or Generals on the ground could not go against their direct orders, even when it was inevitable that they would fail, later on during the war, more responsibilities were given to the ground troops. For instance if they saw that something was not going to go as planned then they could question or call off the attack. Haig was convinced that the German army was now close to collapse and once again made plans for a major offensive to obtain the necessary breakthrough. The opening attack at Passchendaele was carried out after a 10 day preliminary bombardment, with 3000 guns firing 4.25 million shells, the British offensive started at Ypres at 3:50 am on 31st of July. Allied attacks on the German front line continued despite very heavy rain that turned Ypres lowland into swamp. This situation was made worse by the fact that the British heavy bombardment had destroyed the drainage system in the area. This heavy mud created terrible problems for the infantry and the use of the tanks became impossible. This is supported by the following quote: ?Floods of rain and a blanket of mist have clouded the whole of the flounders plain. The newest shell holes, already half filled with sewage, are now full to the brim. The rain has so fouled this low , stone less ground, spoiled of all natural drainage by shell fire, that we experienced the double value the early work, for today moving heavy material was extremely difficult and the men could scarcely walk in full equipment, much less dig. Every man was soaked through and was standing or sleeping in a marsh. It was a walk of energy to keep the rifle in a stat fit to use? During the British blockade the USA was officially neutral but was supplying loans and equipment to the allies. ...read more.

Many of the planned German advances were held up as troops stopped to loot food and supplies from captured trenches or villages. They also came up against well-led and well-equipped Allied forces. The blockades had prevented the Germans from making similar technological improvements. Between May and August the Germans made no further progress and it was clear that they had run out of time and resources. The Germans had ended trench warfare but it was the Allies who eventually gained the benefit. By now, they had large numbers of well-fed and well-equipped troops. These troops were supported by tanks, aircraft and improved artillery. By 1918 the big guns were capable of hitting targets with impressive accuracy as well as laying down smokescreens or giving covering fire for attackers. On August 8 the Allies counterattacked along much of the Western Front. It was now just a matter of time before the Allies defeated Germany. By late September they had reached the Hindenburg Line. By October the Germans were in full retreat. This period has become known as ?The Hundred Days?. Finally, on 11 November 1918 the Armistice came into effect. About 750,000 German civilians died from starvation caused by the British blockade during the War, meaning the German population were willing to surrender. In an interview, Hindenburg stated, "So I must really say that the British food blockade and the American blow in the Argonne decided the war for the allies." "...without the American troops and despite a food blockade ... the war could have ended in a sort of stalemate." Therefore whilst Haig was important, his actions were reliant, and would not have been successful had the financial power of the German not been weakened. Had they been able to import enough food and nitrate, it would have been possible for Germany to defeat Britain and France, or for the stalemate to carry on. If it wasn't for unrestricted submarine warfare then America may not have got involved in the war and would not have supplied the British army with all the money, firepower and men they needed to win the war. ...read more.