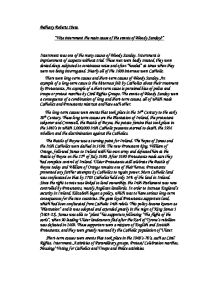 &quot;Was internment the main cause of the events of b****y Sunday?&quot;

In order to increase England's security in Ireland, Elizabeth began a policy, which was to have serious long-term consequences for the two countries. She gave loyal Protestants supporters land, which had been confiscated from Catholic Irish rebels. This policy became known as "Plantation" and it was adopted and extended greatly in the reign of King James 1 (1603-25). James was able to "plant" his supporters following "The flight of the earls", when 90 leading Ulster landowners fled after the Earl of Tyrone's rebellion was defeated in 1609. These supporters were a mixture of English and Scottish Protestants, and they were greatly resented by the Catholic population of Ulster. Short-term causes were events that took place in the 1960's-70's, such as Civil Rights, Internment, Activities of Paramilitary groups, Protest/ Celebration marches, Housing/ Voting for Catholics and Troops and Police activities. In 1967 a group of young Catholics got together and set up a Civil Rights Association. ...read more.

Some Catholics show that they wish to become part of one Irish nation by flying the Irish flag and painting murals on gable walls. If there was a long housing list, Protestants would be put at the top in front of Catholics. Catholics and Protestants had to go to different schools and many Catholics had to walk through Protestant areas to get to school. The long-term causes and short-term causes are linked together. The way that Catholics were treated about housing and education led to Civil Rights Association being formed. The Battle of Boyne led to Protest/ Celebration marches which led to an increase in hatred between the Catholics and Protestants. To answer the question "Was internment the main cause of the events of b****y Sunday?", there could be two views. The discrimination against the Catholics could have caused b****y Sunday because it led to violence and hatred between the two groups. I think that Internment was not the main cause of b****y Sunday. Instead it was an addition to all the other long-term and short-term causes of b****y Sunday. ...read more.