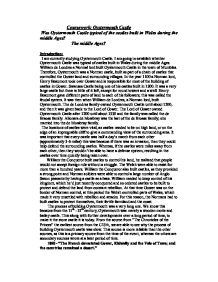 Was Oystermouth Castle typical of the castles built in Wales during the middle Ages?

Coursework: Oystermouth Castle Was Oystermouth Castle typical of the castles built in Wales during the middle Ages? The middle Ages? Introduction: I am currently studying Oystermouth Castle. I am going to establish whether Oystermouth Castle was typical of castles built in Wales during the middle Ages. William de Londres a Normal lord built Oystermouth Castle in the town of Mumbles. Therefore, Oystermouth was a Norman castle, built as part of a chain of castles that controlled the Gower land and surrounding villages. In the year 1100 a Norman lord, Henry Beaumont took over Gower and is responsible for most of the building of castles in Gower. Swansea Castle being one of his castles built in 1300. It was a very large castle but there is little of it left, except for round towers and a well. Henry Beaumont gave different parts of land to each of his followers; this was called the feudal system. It was then when William de Londres, a Norman lord, built Oystermouth. The de Londres family owned Oystermouth Castle until about 1200, and then it was given back to the Lord of Gower. The Lord of Gower owned Oystermouth Castle after 1200 until about 1330 and the family was called the de Braose family. Alionara de Mowbray was the last of the de Broase family; she married into the de Mowbray family. The locations of castles were vital, as castles needed to be on high land, or on the edge of an impregnable cliff to give a commanding view of the surrounding area. It was important that every castle was half a day's march from each other (approximately 3-6 miles) this was because if there was an invasion, then they could help defend the surrounding castles. Whereas, if the castles were miles away from each other, then they wouldn't be able to have a defense system, resulting in the castles over time quickly being taken over. ...read more.

To conclude we would say that there were plans for building the towers but they never got finished as Oystermouth was under attack. Therefore the door was locked up and arrow holes were applied. The curved walls suggest there was a limestone quarry 1/4 of a mile away. Yet, the fireplace was built out of sandstone, as it does not burn as quickly as limestone. Domestic features Domestic features, which were typical of castles, were its keep, great hall, solar, chapel, kitchen, garderobe and basement and cellars. The great hall was the most important room in the castle taking up one floor of the castle keep. It was used for main business such as law and taxes. It served as the castles main dining hall, where people also slept on the floor. The Solar was the private room for the lord and family. The walls would've been covered with paintings and designs, as it was an important room. Its benches were used instead of chairs, as its chairs were reserved for important people. The garderobe had either toilets or privies. It was in here where they cared for and washed clothes. These were the small rooms built in the thick outer walls, and were the down passage away from the living quarters. It also had either a stone or wooden seat with curtains covering the entrance. The sewage went down a chute on the exterior wall into the moat or river or put on the base of a wall. The Chapel was for the lord and his family to go to worship. This would've had an alter with a stone seat for the priest and a cupboard for holy vessels. It was easy to identify, as it would either have had elaborate or traceried windows. The kitchens, was where basic cooking took place in the keep. It is often large in baileys and is easy to identify from their numerous fireplaces. ...read more.