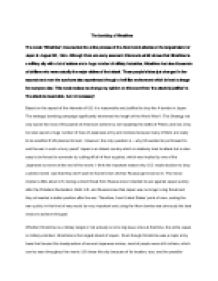 Was the atomic bombing of Hiroshima justified?

The bombing of Hiroshima The movie "Hiroshima" documented the entire process of the Atom bomb attacks on the largest island of Japan in August 6th, 1945. Although there are many scenes in this movie which shows that Hiroshima is a military city with a lot of solders and a huge number of military industries, Hiroshima had also thousands of civilians who were actually the major victims of that attack. Those people's fates just changed in few seconds and even the survivors also experienced through a hell-like environment which is hard to image for everyone else. This movie makes me change my opinion on this event from 'the attack is justified' to 'the attack is reasonable, but not necessary'. Based on the aspect of the interests of US, it is reasonable and justified to drop the A-bombs in Japan. ...read more.

got involved in. The movie implied a little about U.S. facing a direct threat from Russia since it started its war against Japan quickly after the Potsdam Declaration. Both U.S. and Russia knew that Japan was no longer a big threat and they all wanted a better position after the war. Therefore, from United States' point of view, ending the war quickly in this kind of way would be very important and using the Atom bombs was obviously the best choice to achieve this goal. Whether Hiroshima is a military target or not actually is not a big issue since at that time, the entire Japan is military-oriented. Hiroshima is the largest island of Japan. Even though Hiroshima was a major army base that housed the headquarters of several Japanese armies, most of people were still civilians, which can be seen throughout the movie. ...read more.

This was against humanity from many points of view. What is more, at that time, the Japan still had a large armed force, which is far from being out of resistance. There are quite a few reasons to use a massive destructive weapon against such recalcitrant enemy. The crew of 'Enola Gay' should not be charged with any crimes. They are just following orders from their superiors. They did not do anything brutal. There is one scene in the movie shows that due to the jam of the film equipment, those crews didn't even have an impress of the power of the bomb before it finally exploded. On the contrary, I think they should be honored by well performing such a difficult task. Finally, their action directly leaded to the end of the war. ?? ?? ?? ?? ...read more.