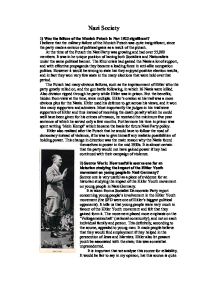 Was the failure of the Munich Putsch in Nov 1923 significant?

n**i Society 1) Was the failure of the Munich Putsch in Nov 1923 significant? I believe that the military failure of the Munich Putsch was quite insignificant, since the party made a serious of political gains as a result of the putsch. At the time of the Putsch the n**i Party was growing and had over 55,000 members. It was in he unique position of having both Socialists and Nationalists under the same political banner. The Rhur crisis had gained the Nazis a lot of support, and with effective propaganda they became a leading force in anti-allie occupation politics. However it would be wrong to state hat they enjoyed positive election results, and in fact they won very few seats in the many elections that were held over that period. The Putsch had many obvious failures, such as the imprisonment of Hitler who the party greatly relied on, and the gun battle following, in which 16 Nazis were killed. Also division ripped through he party while Hitler was in prison. ...read more.

Source one paints us the picture of young men enjoying the novelty of wearing uniform, taking part in army style drills, enjoying life in army style camps, and actively giving something to the community. Also many of the young involved in the Hitler Youth movement believed that if the persecuted minorities they would have better employment opportunities. However source three tells us of the 'Edelweiss Pirates', a youth group opposed to the Nazis. This "riff-raff", (as source one describes them) supposedly stay out late at night, associate with young women and generally act as a discredit to society. The source accuses these young people of writing anti-Hitler slogans on walls such as "Down with Hitler". They are described as a danger to young people and are generally held up as scape- goats for the n**i regime's failures. The authorship and motives are also very important in assessing how sources differ. Source one is written by the SDP and source three was written by the Nazis for the SDP and the Gestapo. ...read more.