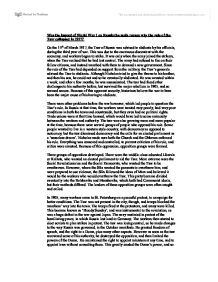 Was the impact of World War I on Russia the main reason why the rule of the Tsar collapsed in 1917?

Was the impact of World War I on Russia the main reason why the rule of the Tsar collapsed in 1917? On the 15th of March 1917, the Tsar of Russia was advised to abdicate by his officials, during the third year of war. This was due to the enormous discontent with the economy, and workers began to strike. It was only when the army joined the strikers, when the Tsar realised that he had lost control. The army had refused to fire on their fellow citizens, and instead marched with them to demand a new government. Since the rule of the Tsar had depended on support from the military, the Tsar's generals advised the Tsar to abdicate. Although Nicholas tried to give the throne to his brother, and then his son, he could not and so he eventually abdicated. He was arrested within a week, and after a few months, he was assassinated. The tsar had faced other challenges to his authority before, but survived the major rebellion in 1905, and so seemed secure. Because of this apparent security, historians believe the war to have been the major cause of his having to abdicate. There were other problems before the war however, which led people to question the Tsar's rule. In Russia at that time, the workers were treated very poorly, had very poor conditions in both the town and countryside, but they even had no political rights. ...read more.

The Tsar was popular at this point in time, but then a chain of events occurred which greatly altered his popularity. The Russian army was unready for war; they had few supplies, little ammunition and weapons, and a shortage of medical supplies and food. The leadership structure of the army was also weak, since officials were only chosen for their social status, and not for their ability to lead. This resulted in a massive defeat in battle. Whole armies were destroyed at the battles of Tannenburg and the Masurian Lakes, although the Russians had expected to win. Quarter of a million soldiers were wounded or taken prisoner in six weeks, and by 1915, three million soldiers were lost. The tsar's support quickly faded in wake of the immense military defeats, although he could not directly be blamed for the defeats until he took charge of the army in August 1915. This decision was quickly proved to be fatal: the Tsar thought he could make his soldiers win because he was chosen to rule by God's divine right. He had little military experience, and this coupled with the fact that he now had direct responsibility for his troops meant that he could be blamed for all defeats. As well as that, the unpopular Tsarina had been left in charge of the country, at Petrograd. She was suspected of being a German spy, and of betraying the army, causing the defeats. ...read more.

There had been 7 million war casualties, raw materials were not reaching the factious, and the unemployment rate was expanding. The final push needed for the tsar to have to abdicate was the March revolution. Workers were striking at the Putilov engine works because they wanted higher wages. The strike spread quickly, and the strikers often clashed with the army. 90,000 marched for cheaper bread at this point. The tsar was warned of the breakdown of law and order, but he ignored the warnings, and stopped the Duma from meeting. The final event was on the 12th march, because the army did not fire on the strikers on that date, but joined them. Instead the army and police joined the General Strike that had been called. They marched together to demand a new government. The tsar realised how serious events were, and tried to return to Petrograd. However his train was stopped outside the city. The generals warned him of how serious matters had become, and advised him to abdicate which he duly did on the 15th March. I conclude that although Nicholas had made many mistakes before the war, the mishandling of the war was the final catalyst that led to his abdication. If he had not mishandled the war so badly, he would not have lost the support of the army. The army's support in previous crises ensured his survival then, but once he had lost their support, he was powerless to act. ...read more.